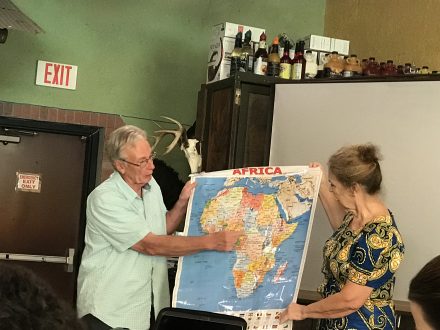 Thursday afternoon Kiwanis Club hosted Dr. Stan Webb and Mindy Webb, who spoke on their mission trip to Africa, where they helped children learn to speak English and play the piano among other things.

The Webbs were stationed in the Democratic Republic of Congo, where they said there is no postal service or credit card usage and only one mile of paved road.

The couple is associated with the Jesus Christ Church of the Latter Day Saints and helped the church by doing various community service projects and helping teach the blind, elementary school and middle school students.

Mindy reported that only the most affluent children could attend school. Each semester costs $15 and the final costs $15 as well. Students who can’t afford the final are forced to retake the entire year. While the children enjoy learning English, they are taught French in school. The kids have a strong desire to attend school. Those with large families often are forced to choose which kids to send, so the older children resort to jobs in order to make the money necessary.

Mindy showed the club a young boy, who is one of seven children. He was unable to attend school, due to the costs, so he digs out clay and makes bricks. He sells them for one cent to the public in hopes of raising enough money.

It is not uncommon to see children doing this, as most families are quite poor the Webbs said.

“Most homes are made out of sticks and mud,” Mindy said. “For dinner they go outside and cook with charcoal that they have had to carry up and down the hill all day long.”

One of their common dishes is manioc, which grows wild. Mindy explained that they mash the leaves and will either boil or froth the roots and can eat them later. The dish resembles that of spinach and dry potatoes.

When not cooking, Mindy said the women are often designing their own clothes.

“They love to create matching outfits for their clan,” Mindy said.

She showed a picture of a funeral procession, where every woman had the exact same dress and pattern on. Mindy said she took part in wearing the same outfits as some of the women and enjoyed it because they are so colorful, and it just brings so much joy for the women to create them.

When Mindy and Stan were not out partaking in activities with the locals, they spent time in their duplex. It was surrounded by a barbed wire fence and often lacked water and electricity during the day. The couple had to sleep with a mosquito net surrounding them to protect them from bugs and other animals during the night.

While it was certainly a difficult transition, the Webbs really enjoyed their time immersing themselves into the culture and teaching the children English songs and helping the blind play cards in Braille or teaching them how to play Braille Bingo.

The Webbs ask for the community’s prayers in the Democratic Republic of Congo, as the children really need it. They fear what will become of them growing up, because the government does not seem to show interest in the youth.

They have not made plans to return yet, but they said they will always remember their time there and the beautiful people they met.