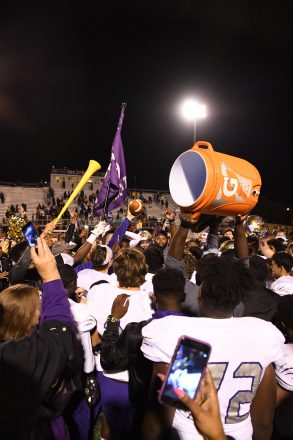 Bainbridge scored 20 points in the fourth quarter Friday night to beat Stockbridge 20-19 in the Class AAAAA Semifinals and advance to the State Championship.

The Bearcats (9-5) had several missed opportunities earlier in the game to put points on the board, but scored when it counted in ways that were nothing short of miraculous.

“(The players) believe in the process,” said coach Jeff Littleton, his shirt soaked from a Gatorade bath after the Bearcats held Stockbridge to four final plays. “We kept telling them to go with it and keep working what we do. Believing in the process of everything that we do. Everyone believing what we do, determinato0n and refusing to lose.”

The Tigers scored the only points of the first half with just over a minute and a half left in the second quarter. A blocked point after attempt gave Bainbridge hope down 6-0.

Stockbridge (12-2) came back firing in the third quarter with another big touchdown drive that gave them a 13-0 lead.

Bainbridge finally put points on the board on a screen pass from quarterback Quayde Hawkins to Caleb McDowell, who caught the ball at the 4-yard line, summersaulted over a defender and landed in the end zone for the score with 6:37 left in the game.

On the Tigers’ next drive, Stockbridge threw an interception pass to freshman Zion Bouie, who snagged the ball out of the air and hauled it 40-yards all the way back to the end zone.

“When I saw the pass, I was in great position, so I had to catch it,” said Bouie. “I had to run it back for my team. I couldn’t believe it.”

Bainbridge was up 14-13 with just under five and a half minutes left in the game. Stockbridge answered the call and marched right back down the field for a touchdown and a missed PAT to go up 19-14 with 1:52 left in the game.

On the ensuing kickoff, Stockbridge squibbed the kick, which bounced into a few players’ hands, then was pitched a couple more times before it was thrown to McDowell, who caught the ball and flew down the sideline 60 yards for a touchdown and a PAT from Caleb Harris.

Bainbridge was up 20-19 with just over a minute and a half left in the game. Stockbridge pushed, but met its end on a fourth down pass that was just short of the first down marker.

“We bent a little bit, but we didn’t break,” said Littleton. “Just a heck of an effort.”

The Bearcat offense took victory formation with 15 seconds left on the clock and secured Bainbridge’s spot in the State Championship.

Bainbridge started the season 2-4 before heading into region play, where they finished 3-1 after a loss to Warner Robins. The playoff run Bainbridge is on has been incredible, with the Bearcats winning the last three games on the road.

Fittingly, Bainbridge will meet Warner Robins (12-2) in the State Championship on Tuesday, Dec. 11, at 4:30 p.m. The Bearcats will have a chance at redemption against a region foe that beat them 38-0 the first go around. The Demons defeated Rome 45-28 on the other side of the bracket Friday night to punch their ticket to the State Championship.