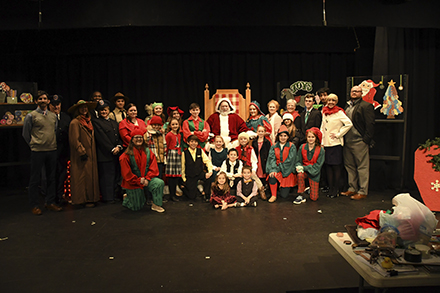 Hardly anyone needs to be reminded of the plot of this classic 1947 Christmas film. All are fondly familiar with the characters: Maureen O’Hara, who played the mother of a delightful little Natalie Wood, who encounters the department store Santa Claus (Edmund Gwenn) who claims to be the real Kris Kringle. It is a perennial Christmas favorite that never seems to go out of style—making it the perfect event for a family holiday outing.

The Bainbridge Little Theatre has chosen to present their version this Christmas season. The play opens on Thursday, November 29 and runs through the weekend, with 7:30 curtain times each weeknight, and closes with a 2:30 p.m. Sunday matinee on Dec. 1.

The show is being directed by Rachel Crager, current chair of the BLT board of directors. She is assisted by fellow board member, Justin McStay-Harrison as the stage-manager.

The show requires a large cast, with many taking on a couple of roles. There are also many newcomers to the BLT stage in this production— always good to see.

Henry Intili once again takes on the role of a Judge, after showing his judicial skills in BLT’s last production, “A Few Good Men.” Joe Livingston will liven the stage playing  the drunken Santa.

Carrington Smith is a Dutch girl, Lyric Taylor is Sharon. Sonia Beam portrays a bag lady as well as a foster parent. Ashlyn Brock is a rich lady, Hugh McStay-Harrison is Sawyer, Jessica Bostick also doubles up as Mara and a shopper. Tiernan Steffen plays Johnny, Diego Luevano is Finley and a shopper.

Seating capacity is limited and tickets at the door may be scarce. Make your reservations now, by going on online at www.bainbridgelittletheatre.com or email bainbridgelittletheatre@gmail.com. Some trivia you may not know about the play, as reported on Wikipedia, are: O’Hara was initially reluctant to take the role, having recently moved back to Ireland. Upon reading the script, she changed her mind and hustled back to the U.S. for the filming.

FAO Schwarz then sold the windows to the Marshall & lisley Bank of Milwaukee, Wisconsin, where they are on display every December in the bank’s lobby on North Water Street.

Small Business Association tells Rotarians the ways they can…