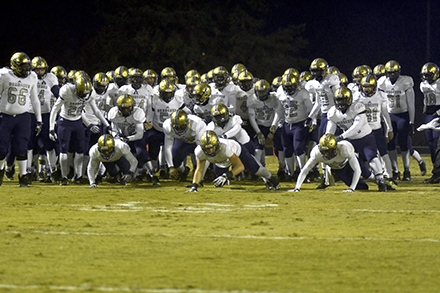 For the second time in four years, Bainbridge has booked a trip to the State Semifinals.

This year’s situation is slightly different from the last go at it, to say the least. Bainbridge was 13-0 heading into its semifinals game against Cartersville in 2015.

This year’s team is 8-5. The Bearcats started off slowly with a 2-4, but have hit their stride since, only losing one game since Oct. 5. Even more steam has picked up after Bainbridge toppled Buford (10-3) last Friday in the State Quarterfinals.

“The thing is now, that Buford game is over,” said coach Jeff Littleton. “You have to get off that cloud. You have to go back to work. Like I tell the team, with success comes complacency, and you can’t think that you’re there yet.”

But that might be why Bainbridge has gelled so well and beaten the state ranked No. 7, No. 5 and No. 2 teams in back-to-back-to-back weeks: they aren’t complacent. Perhaps they realized they could do better after a sluggish start, and together with the coaches have put together a campaign that has rocketed them all the way to the Final Four.

Littleton points to the players as the ones responsible for the team’s second wind.

“I am really excited for the players, because we started out 2-4,” said Littleton. “My compliments go to them for hanging in there and continuing to work hard and being the best that they can be. I knew all along, and I said it all along, that we could be in position to do some good things if we just continue to gel and work. And we did.”

Bainbridge’s seniors remember being freshmen on the 2015 team that made it to the semifinals. While none of them played in that game, they remember working out with the team during the lead up.

The same goes for the coaches. While the last semifinal trip was Bainbridge’s first with Littleton’s coaching staff, the experience and preparation carries over to this year.

Bainbridge’s semifinals opponent, the Stockbridge Tigers (12-1), are the No. 2 seed from Region 4-AAAAA. A coin flip was made to decide who would host the semifinals game, with the Tigers winning. Now, the Bearcats will hit the road for the third straight week.

Stockbridge runs a triple-option offense that also carries a strong play action pass threat. Quarterback Jevon McDonald (2) leads the Tigers in rushing with 1,034 yards on 144 carries and 13 touchdowns. He has also gone 86-of-153 in the air with 1,455 yards and four touchdowns. Running back Markell Ramsay (414 yards, 10 TD) and wide receiver Isaiah Taylor (655 yards, 7 TD) are two more players Bainbridge’s defense will have to keep a sharp eye on.

“They are very athletic,” said Littleton. “Well-coached, and they play hard. Really similar to us, they just have different schemes. They are triple option with some play action passing and short gain passing mixed in… They get you biting on that triple option. It’s really tough having to defend the option then having to defend the play action pass.”

Bainbridge’s defense proved it could stop the run attack when it needed to against Buford, but still gave up a couple explosive plays that resulted in touchdowns. The Bearcats have not played a true triple option team this season, the closest being Veterans, who Bainbridge beat 27-14.

Trouble in the box could open up more passing for Bainbridge’s offense, but only if its running backs can chip away at those large tacklers up front and open up the threat in the air.

Kickoff is at 7:30 p.m. at Stockbridge. The winner of the game will head to the State Championship at Mercedes-Benz Stadium.

A game that will be remembered