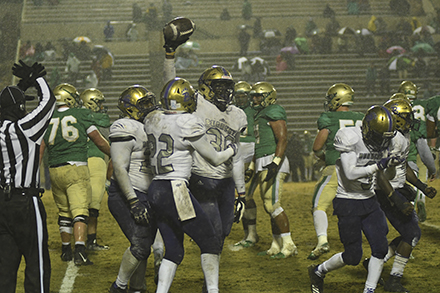 Purple and gold flooded onto a green field with 0:00 on the clock.

They didn’t let up for the rest of the night.

The Bearcats defense stopped the Wolves just enough and fended off one last drive with under a minute to play and Bainbridge up 23-20. Four plays, four stops. Bainbridge gained possession of the ball with half a minute left in regulation and assumed the victory formation.

Buford was ranked the No. 2 team in Class AAAAA and was a 14-point favorite against the Bearcats.

The temperatures dropped into the upper 30s, the wind was blowing and a light rain created a constant mist throughout the night. Bainbridge ignored all of it, coach Jeff Littleton said.

“We braved the elements and the cold and the wind, and our kids never batted and eye,” said Littleton. “They didn’t complain, nothing. They just went to work. They just love to play football. That’s why we’re at this point. The bottom line is they don’t want it to be over.”

Bainbridge got off to a perfect start on the Wolves opening drive when they forced a punt with Buford backed in their end zone. Bainbridge blocked it and score a safety to go up 2-0. Bainbridge immediately took the kick off and marched back down to score against, and a second touchdown came with just under 30 seconds left in the first quarter.

Bainbridge was up 16-0 going into the second half, and the Bearcat defense allowed two touchdowns before halftime. The point after attempt was blocked on the first score.

Bainbridge took the kick off to start the second half, and Caleb McDowell took it 90 yards for a score and a 23-13 lead.

“It means the world to be a Bearcat tonight,” said McDowell, who had two touchdowns on the night. “We came here thinking we were the best team in the state. Weight room, on film, on the field. It was intense. It’s amazing. Everybody doubted us, except Bainbridge.”

Buford’s final score game on a long touchdown run on its next possession, giving Bainbridge only a 3-point lead.

Buford threatened to score again with 2 minutes left in the game, but the Bearcat defense forced a field goal on fourth down that was blocked.

“We believe in our defense,” said Littleton. “We knew we would have to get past their quarterback and we did.”

Bainbridge rallies to swat Yellow Jackets in second round…