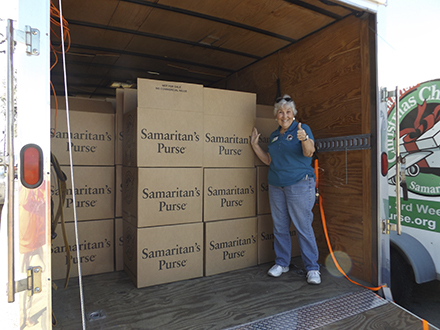 Friday afternoon, volunteers from Samaritan’s Purse could be found at the Operation Christmas Child drop-off location, loading up the truck to ship boxes across the world.

Bainbridge coordinator Judy Ward said this year they had approximately 2,400 boxes, which is something she said was really proud of and did not expect due to the widespread damage Bainbridge and surrounding areas have faced.

Ward was happy to know that although she won’t be delivering boxes, someone in Bainbridge will get to experience that joy.

Dr. Buz Beauchamp is currently in Africa at the African Bible College doing some work and reported to Ward that ABCU is partnering with Samaritan’s Purse in the delivery of the shoeboxes.

“I never thought that I would have the privilege to be at the actual distribution,” Beauchamp said in his email to Ward.

Samaritan’s Purse gave his village over 2,000 boxes to hand out, and Beauchamp reported it was amazing to see the different reactions.

“I have seen kids actually tremble with excitement,” he emailed.

The real goal is to see the love of Jesus, though Ward explained. The kids first get a Biblical lesson and then receive the boxes as a concrete example of the love Jesus has for all his children.

Ward is so thankful to everyone who donated this year and she hopes to see Bainbridge’s love spread all over the globe this season.