Rotary gets updated on GDOT 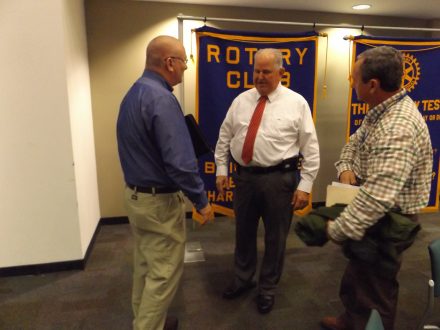 Tim Warren, a safety engineer with GDOT spoke to Rotary this week about the  structure of GDOT, its divisions, responsibilities, challenges and the status of planned projects for this area.

Warren has spent 27 years with GDOT and is located in the Tifton office, where he works on preconstruction issues, such as design, survey, rights of way, planning and programs.

He spoke of the work the department took on following Hurricane Michael, which he said was a statewide event for GDOT. The first order of business was to clear roads and highways with a goal of first clearing a 12 foot path for emergency vehicles to be able to respond. The clearing of downed trees and branches on the road sides is ongoing, and he mentioned the number of 2833 loads of trees and brush that have been carried off.

Maintenance and repair are ongoing, and he referenced how quickly the emergency response was to the bridge that was damaged by a truck carrying large equipment on the by-pass in May. The roadway was reopened on July 21. He indicated there are 425 employees in this district, most of them in maintenance positions.

He then gave a progress report on the status of some upcoming projects in the area.

• Construction (replacement) of a bridge on SR 253 at Spring Creek that would be longer, wider and four feet higher. The bids are out and it is scheduled for March.

• SR 38 at US 84 Bainbridge Bypass, is considered a safety project, with bids to be opened Friday of this week. Mention was also made of other Bainbridge bypass improvements to improve the safety. The roadway that was built in the 1960’s has narrow bridges and some difficult merges. This project is now in the concept stage with construction to begin 2025.

• Whigham Dairy Road upgrade will widen the shoulders. Surveys are now being done on that project, expected for 2020.

Other projects are resurfacing of roads. Currently there are 37 active projects and readers can find the list by visiting the website of GDOT.

The department also stresses road safety. Warren reported that road fatalities are up 32 percent over the last three years. He defined distracted drivers as the biggest problem and gave three safety tips for all drivers. Buckle up, get off cell phones and mobile units, drive alert.