Bearcats to face undefeated Wayne County in second round of playoffs 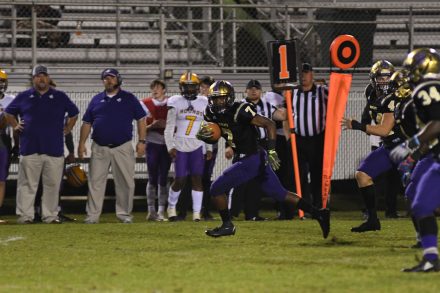 Bainbridge coach Jeff Littleton doesn’t have to worry if his team wants to keep the season alive or not. He can tell by the way they play, the way they practice and the way they lift and study film that his players enjoy the process.

Combined with how the Bearcats (6-5) have been trending upward since losing to Warner Robins a month ago, Littleton is pleased with how Bainbridge is competing. Last Friday, Bainbridge handled its business against an 8-2 Jones County team in the first round of Class AAAAA state playoffs with a 40-13 win.

“This group has embraced it and continues to work hard every day,” said Littleton. “For the most part, they don’t look over days and they work to get better every day. It’s just a compliment to them, as well as the coaches who motivate them.”

Bainbridge’s recent success can be found in the details. Finishing blocks, executing assignments on defense and players leaving their egos in the locker room have all reaped massive benefits for the team as a whole.

Littleton also noted the team has seen an uptick in explosive plays, specifically plays on offense that are netting the Bearcats 15-20 yards.

“Then you have players that do that, and on top of that they have really high motors, they really want to go make the play,” said Littleton. “They really want to pursue the balls away from them. Again, that’s just the attitude of the players.”

It certainly won’t get any easier from here. Bainbridge plays Wayne County (11-0) in Jesup this Friday for the second round of state playoffs.

The Yellow Jackets haven’t relied on fancy plays or trickery for their perfect record so far, Littleton said.

“They are a great football team,” said Littleton. “They don’t do anything fancy on either side of the ball. They have some playmakers on both sides of the ball that really get after it.”

Littleton knows a three-and-a-half-hour drive is not exactly ideal for his players before a second round playoff game, and also acknowledged Bainbridge’s 1-3 road record this season.

“We haven’t played very well on the road,” said Littleton. “Up to Thomas County Central, that was really the first time we have played well on the road. It’s going to be a challenge,”

Bainbridge kicks off against Wayne County at 7 p.m. this Friday in Jesup at Jaycee Stadium: Donaldson-Madray Field (1355 W. Orange St.).

Bainbridge takes first round of playoffs by storm, beats…