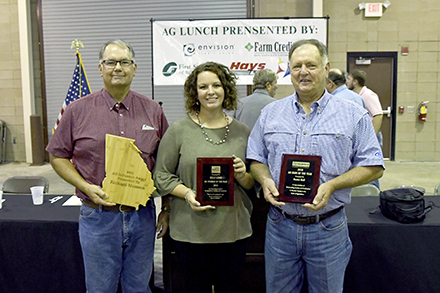 Despite the devastation many farmers face after Hurricane Michael churned through Decatur County a month ago, the Cloud Livestock Facility was packed with men and women eager to show their appreciation.

“I’m in really good company. I don’t know what I’ve done to deserve that,” said Bell with a smile. “I thank everybody that had anything to do with it.”

Bell’s daughter, Lindsay Bell-Hayes, introduced him before naming him as the 2018 winner, proclaiming her dad was born with agriculture in his veins.

“It’s really easy for me to brag about my daddy, because he has always worked tirelessly to provide food and fiber for our growing population,” said Bell-Hayes.

Aside from farming, Bell’s early years were immersed in the Georgia Young Farmers Association where he has received many awards. He has also poured hundreds of hours and loads of dedication into youth livestock shows.

The 2018 Ag Woman of the Year wasn’t born and raised in Decatur County like many past recipients have been, but her dedication to the farming community here did not go unnoticed.

Long was raised on a farm in South Florida, where her dad was a third generation farmer. She was praised for the many hats she wears. From working in the office to driving a tractor to working cattle, anyone who knows Long knows she will do whatever needs to be done to get the job done.

She also is a wonderful mother to three children.

“This community has welcomed me with open arms,” said Long. “I am very humbled to receive this award and be recognized in a community I didn’t necessarily grow up in, but absolutely love being a part of.”

Monson, who’s farming career includes working as a pecan farmer as well as at Farm Credit, has spent 30 years helping farmers. Through both the good times and the bad, his leadership, vision and commitment to agriculture never wavered.

“I don’t know where I’d be today if I didn’t fall in love with agriculture and wanted to be in the business,” said Monson. I feel blessed to have had 30 years working with farmers. I feel blessed to work in an industry that always gave back more than I gave.”

The guest speaker at the luncheon was Georgia State Senator John Wilkinson, the Chairman of Agriculture and Consumer Affairs Committee, who praised the room full of farmers for their tireless, often thankless work. Wilkinson said just 1 percent of the country’s population can produce enough food to keep everyone fed.

“Farmers like you have become so efficient that it’s easy for people to take you for granted,” said Wilkinson. “They think it’s no big deal. It’s only 1 percent of the population. What happens if we lose that 1 percent of the population? It’s not just like having an oil embargo. If you get where people are hungry and there’s not food on the table, we have a real problem.”

Wilkinson said the one thing the U.S. does better than any other country comes down to the amount of food it produces.

“We have the most abundant food, the safest food, at the lowest price of any country in the world,” said Wilkinson. “We get spoiled. We pay about 15 percent of our disposable income on food. In Japan, they spend half their income. In a lot of countries, it’s half their income. If we have shortage tomorrow and everybody had to start paying half their income for food, that would be a crisis, wouldn’t it? So we have to be proactive, and we have to work. I want you to know that I’m committed to that.”