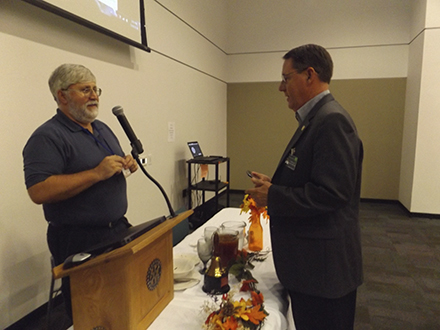 FEMA representative Dom Bee, who works in the FEMA Chief Inspection Office in Washington, D.C., spoke to the Bainbridge Rotary Club at their weekly meeting Tuesday.

He was deployed to Decatur County on October 15 as part of the effort to assist with the recovery from damages caused by Hurricane Michael.

He acknowledged that FEMA has three phases of helping—before, during and after a disaster occurs.

Bee made it clear that FEMA is not in charge of the efforts going forward, but is one of many players, with FEMA providing support that local government and agencies cannot provide. “It is a team effort,” he says.

It is a matter of helping local governments and survivors obtain financial help from the federal government.

Bee was complimentary of all the goodwill organizations that have stepped up to help this time of loss.

A brief history of FEMA was outlined, indicating the agency was created in 1979 when Jimmy Carter was president. The goal was to provide emergency help to a lot of small disasters that occur all over the U.S., as well as other countries.

What exactly does FEMA do? Bee said his job is to work with local mayors and county commissioners, providing contact back to FEMA in Washington to acquire assistance to the local governments. Grants are made available to local governments to provide the amount of dollars needed to rebuild.

Once the governor of the state asks for a declaration of a state disaster and it is approved by the President of the U.S, then a lot of people come in to help. FEMA is just one of the players and helps coordinate and support the other organizations.

FEMA workers are required to be compassionate and fair and to show respect to all.

In addition to aiding governments, individuals who have need to apply for assistance can go in person to a Recovery Center, go on line to www.DisasterAssistance.gov to file an application or call the hotline 1-800-621-FEMA (3362). FEMA representatives are dropped in to the affected area to help people who do not have the resources to go through the regular channels. FEMA workers can actually go door-to-door making sure every survivor gets the chance to apply. There is a 30-day deadline for making applications for assistance and that deadline is December 13.

Looking at insurance coverage is first, but for those without any, or not enough, referrals can be made to another of the players—the Small Business Administration, where they may be able to get a loan with an interest rate as low as 2 percent. One of the questions directed to the speaker from a Rotary member was whether or not FEMA was involved in clearing the roadways and right-of-ways of debris.

Bee’s response was that he realized it was not going as quickly as it could be and explained the situation that arose when the State of Georgia decided to use a contract they had with the Army Corps of Engineers. Competing corporations then filed a protest and the process was put on hold until the protests were resolved.

Bee said it was his understanding that removal has begun and that GEMA is in charge of that.

Another question asked what was the priority for individuals— homes, cars, or other property? He responded saying it had to be the primary residence and the major goal was to bring the home back to a sanitary, safe, livable condition.