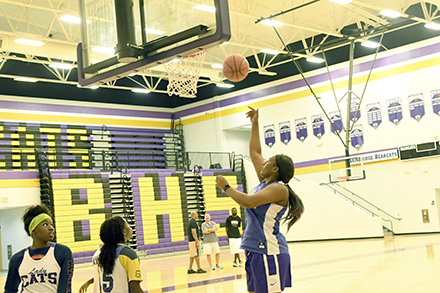 After losing some key senior players this year, the BHS Varsity Lady Cats basketball team is ready to rebuild and fight to the finish this season.

Coach Kelvin Cochran said this year’s team will be a different team than most fans have seen in the previous years, because some of the starters graduated, but he still promises a competitive team that has been practicing hard every day.

“The team has been growing, learning and working hard every day,” Cochran said.

Cochran said he realizes this year will be tough replacing Tytianna and Nadia who graduated, but he has had players step up and be willing to take on their roles, which is something he is really proud of.

Some of the previous players were known for their scoring power, but Cochran said this year they have redirected their focus to playing a really strong defense. He wants the girls to play team ball, and work on communicating on the court.

“We are getting better day by day on defense,” Junior Destiny Turner said. “It’s a slow process, but we are taking it step by step,” Senior Mycha Harris said.

The teammates agreed that communication has been key and it helps that they hang out outside the court and are friends win or lose.

Cochran said he knows shooting may be a bit more difficult this year, but he is confident that if the team can defend the ball and stop the opponent from getting to the net then it won’t be an issue.

Cochran knows that they still have some stiff region competition out there, though. He said the toughest teams they will play are Veterans and Harris County. Veterans has two of their key players returning, who have been starting ever since their freshman year.

“They have a great nucleus built around them, it’s going to be tough,” Cochran said.

Cochran watched them during summer ball and said he was impressed and wants the team to be ready for them.

Harris is not backing down though; she is most excited to play Harris County and can’t wait for their faceoff.

Harris, along with other players is working to take on the leadership roles. Cochran has seen them lead by example and take a prominent role in the athletic program and looks forward to seeing them progress throughout the season.

He said they learned to execute better, and he is excited to see them start off and bring the energy they brought during the summer in their game on Tuesday.

Bearcats basketball team hammering down fundamentals ahead of 2018-19…