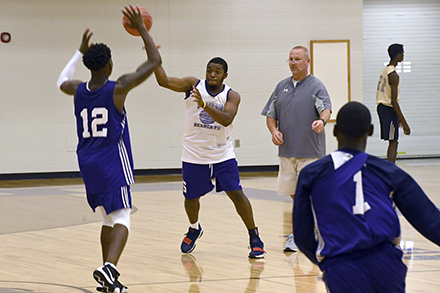 Coming off a 10-18 season last year, Page sees plenty of potential in the team.

“Start small and work big,” said Page. “Each week, I look at it as a tournament. I always viewed it as a region championship. We are trying to go 2-0 every weekend. That’s what I have always looked at.”

Other goals include creating a home court advantage with a loud atmosphere every home game, playing hard every game and stepping up to play tough teams, such as region opponent Warner Robins, last year’s state champions.

“I have talked to the kids, told them you just have to step up to the occasion,” said Page. “You are going to have to go through people like (Warner Robins). Right here at the beginning, you don’t want to get discouraged. They are going to make mistakes, but you make mistakes going at full speed.”

Page noted that this year’s team is smaller than he’s used to coaching, but that’s not neces-sarily a disadvantage. It does mean they will have to rebound well and defend well.

“Our defense has got to get better,” said Page. “Every part of the game has to get better. Right now they are thinking a lot, and not just playing ball.”

The team gelling will take some time, Page said. Unfortunately, Hurricane Michael put the team off the court for a few days, and an early release last week cut another practice from the schedule. Page called it a weird beginning to the season.

Nonetheless, he likes the way the team has responded.

“We are getting there,” said Page. “It’s going to take some time. Everybody is giving good effort.”

After graduating a large class last season, three seniors return for the Bearcats this season: Bryce Jones, who tore his ACL last season, Jeremiah Davis and Kalun Brown. The junior class is also large, and Page expects the upperclassman to set new expectations for the team.

“I don’t know if I have ever had a junior class this size,” said Page. “We are building.”

The Bearcats will scrimmage next Tuesday, Nov. 13, at Early County before traveling to Berrien to open the season on Nov. 17. The first home game will be Tuesday, Nov. 27, at 7:30 p.m. against Colquitt County.

Bainbridge has work cut out for it against stellar…