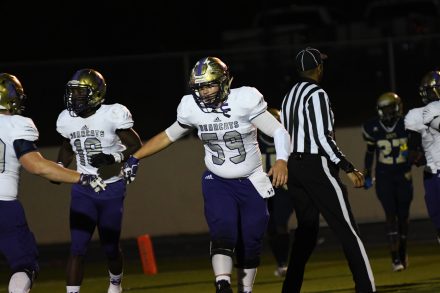 Bainbridge has been lucky to be on the winning side of blowouts the past couple of first rounds hosted at Centennial Field.

Fortunately for Bainbridge (5-5), it’s playing its best football of the season at the perfect time. Last Friday, the Bearcats defeated Thomas County Central 44-11 in Thomasville, securing a second place finish in Region 1-AAAAA behind Warner Robins. In the past two games, Bainbridge has outscored its opponents 93-11.

With the pieces finally clicking into place, Bainbridge will host Jones County at Centennial Field, marking the fourth straight year the Bearcats have hosted the first round of state.

On the ground, senior running back Semaj Ingram (24) has racked up 757 rushing yards and five touchdowns. Quarterback Hunter Costlow (11) runs the show under center. He has gone 139-of-217 for 2,413 yards and 30 touchdowns this season.

The Greyhounds have large linemen on both offense and defense, Littleton said. Four-star defensive end Ja’Darien Boykin has 31 tackles and 12 sacks this season. He is fielding offers from 23 schools, including Georgia Tech, Washington State and South Carolina. Offensive tackle Trey Bonner has offers from App State, Chattanooga and Georgia State.

“It’s going to take a home crowd and playing at our best, which we are starting to play a little better toward the end of the season,” said Littleton. “Of course, we got all the marbles to play for.”

Bainbridge kicks off against Jones County this Friday at 7:30 p.m. at Centennial Field.