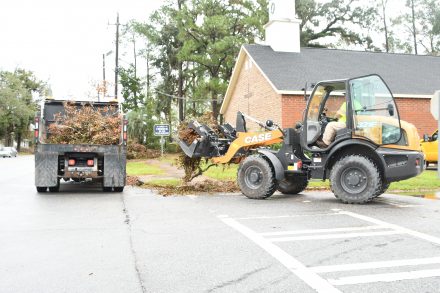 The Georgia Department of Transportation sent trucks and equipment to Bainbridge Friday morning to begin cleaning up debris around the city.

In the meantime, a contract dispute between an independent contractor and the U.S. Army Corps of Engineers will likely be resolved soon, allowing hundreds of trucks stationed at the Decatur County Industrial Park to hit the streets and begin removing debris caused by Hurricane Michael more than three weeks ago.

The delay is caused by a debris contractor who filed a protest with the Government Accountability Office (GAO) after the Corps of Engineers awarded the contract to another company for the debris removal effort. This resulted in a temporary stop-work order for five counties, including Decatur County.

The work stoppage is legally required until the GAO can assess the merits of the protests. Meanwhile the Corps of Engineers continues to work as quickly as possible to resolve these protests and prepare to immediately resume debris removal once resolved. Work continues in Lee and Baker counties seven days a week.

The counties currently under a work-stop order are Mitchell, Miller Dougherty, Seminole and Decatur counties.

Thankfully for Bainbridge residents, GDoT is able to clear debris on its own authority.

“It’s a huge help,” said Bainbridge City Manager Chris Hobby. “What they are doing, we need it desperately. We are very happy they are here. Hopefully the other contractors will be able to get started—hopefully—in the morning.”

Locations around the county have been designated as dumping zones for the debris, where it will be shredded, chipped and burned.

The GDoT crews began on either side of Shotwell Street Friday morning and are working their way toward the center, picking up debris and trash left on the curbs and right of ways after Hurricane Michael.

More than 260 GDoT employees left from the Tifton district office yesterday to spread through the state and assist local governments in cleaning up the debris.