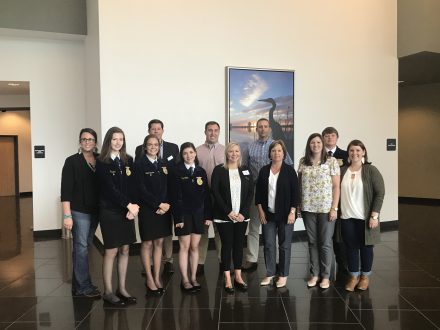 Thursday afternoon members from the Bainbridge FFA chapter spoke to the Chamber of Commerce about their recent trip to Indianapolis for the national FFA convention.

During their time at the convention, FFA officers had the opportunity to visit Churchill Downs, the Kentucky Derby Museum and Purdue University’s agriculture department.

While at the convention, members got to hear from a variety of speakers. One of Faith Taunton’s favorite speakers was a comedian they heard from on the first night of the convention. She said he spoke about his high school experience and how he was shy and the quiet one, but he really took what he learned in FFA to grow into a better speaker and now uses his voice as a comedian to speak on that around the world.

Taunton, along with fellow officers had the opportunity to attend break out sessions at the FFA Fair, Mall and College Convention. She attended Mentor, Motivate and Teach Ag. During her session, she said she learned how big of an influence her agriculture teacher can be inside and outside the classroom. She also furthered her education on what being an agriculture teacher consists of if she decides to pursue that career path.

However, Taunton’s favorite part of the convention was learning more about her fellow officers. Every night the group would do an activity that helped them grow together and learn how other officers interact in certain situations. They attended a Garth Brooks concert and a haunted house, among other things.

Taunton said they also became closer with other FFA groups. At their hotel, two other chapters were staying there from North Dakota and Arizona, in addition to a group from Miller County who they’ve competed against before.

“Everywhere you went it was a huge crowd of FFA members,” Taunton said. “All you see is blue and gold.”

Taunton and fellow officer, Sarah Matthews enjoyed being a part of that, though and said now they have new, close friends from all over the world.

One of the prominent speakers came on the day the FFA team had to leave, but they were able to live stream in.

President Donald Trump came to speak at the FFA Convention and commend them for being part of an organization that has the ability to change their life and their future.

“It was really cool that he thought enough of us to come and speak,” Taunton said. “He is only the second President in term to have ever done that.”

Taunton, along with her fellow officers enjoyed everything the FFA convention had to offer and they hope some of the knowledge they gained will be useful as they move forward throughout the year.