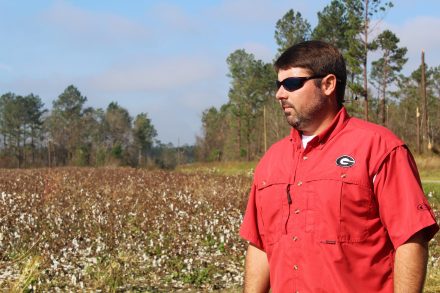 Hurricane Michael struck the heart of rural Georgia in early October. The storm’s track took a staggering toll on agriculture, which is a $73.3 billion industry in Georgia, making it the No. 1 contributor to the state’s economy. Damage estimates as of Oct. 25 exceed $2 billion. Cotton loss is $550 million; vegetables, $480 million; pecans, $560 million; poultry, $25 million; peanuts, $20 million; timber, $763 million; and the landscape and green industry, $13 million.

Gerald Long is the 12th president of the Georgia Farm Bureau. Long is a diversified farmer from Decatur County, Georgia.

He raises cattle and grows peanuts, vegetables, corn, cotton, hay, small grains and timber with his family on their farm near Bainbridge. Long was among the Southwest Georgia farmers selected to meet with President Trump on Oct. 15 in Macon, Georgia.

“As president of Georgia Farm Bureau, I want to encourage our people, the farmers, to be patient. We’re at one of our lowest moments in life, and patience is tough right now,” said Long.“We’ve got a good many retired farmers, or getting ready to retire, that maybe had 50, 75 or 100 acres of timber out there. That was their 401K. That was their retirement, and it’s not there now. It’s gone.”

Dollar is the third-generation owner of his family business, Dollar Farm Products, which has been in business since 1939. The Dollar family raises cattle and grows cotton, peanuts, corn and soybeans. Dollar was selected to meet President Trump in Macon on Oct. 15, and also hosted Vice President Mike Pence for a post-storm farm tour.

“We’ve lost 14 out of 26 irrigation pivots personally. The latest count I got yesterday talking to four or five different people and making sure they were not counted twice, I believe there are 523 pivots down in Decatur, Seminole, Miller and lower Early county,” said Dollar.

“We are in the peanut business here at Dollar Farm Products and we lost all the peanut infrastructure here to elevate peanuts to get them off of semis and into ware-houses, so we’re going to have to redo all of that. I just got a bid a minute ago and it’s going to take us six to eight weeks to get that running, but peanuts won’t last in the field another three weeks. So we are working diligently.”

Stuart Griffin is a farmer in Bainbridge, Georgia. He raises cattle on his operation, which includes approximately 2000 head. Griffin Farm also grows peanuts and corn.

“Devastating would be the main word I would use, but I’d also say we are fortunate and blessed. Even though it’s hard to look at it that way,” said Griffin. “I’m humbled by the people that are reaching out to us. It’s unbelievable. People that don’t even know me. A guy from Mississippi just called and said, ‘I’m coming with a load of hay.’ I don’t know him, never heard of him. I said, ‘I can’t pay you’, and he said, ‘I don’t want you to pay me. We had a disaster a couple of years ago and Georgia came calling.  I want to pay it back.’”

“My granddad originally built all this infrastructure. We don’t have a lot of newer stuff and that’s the problem I’m seeing,” said Rentz. “My insurance is not going to cover what it will cost to replace this now. We never expected this kind of total devastation.”

“Unfortunately, our worst thoughts were realized with Hurricane Michael,” said Georgia Agriculture Commissioner Gary W. Black. “We saw months and sometimes years of work just laid over on the ground in a matter of seconds. These are generational losses that are unprecedented and it will take unprecedented ideas and actions to help our farm families and rural communities recover.”

For more stories on the devastation farmers are facing in the wake of Hurricane Michael, see the Down on the Farm special edition, included for free inside this issue of The Post-Searchlight.