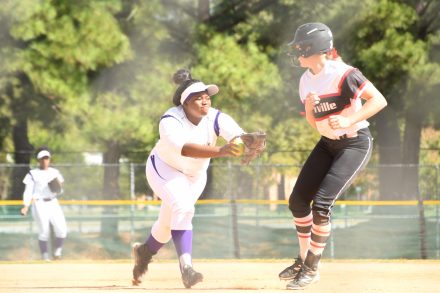 The Lady Cats Varsity softball team finished third in State Saturday afternoon after a narrow loss to Loganville forced them out of the competition.

Saturday morning, the Lady Cats faced off against Locust Grove, who they had previously, beat in regular season play. The team knew it would be tough competition, but were ready to take them on.

Senior Desirae Beachem came out swinging in the first inning and scored a home run to kick things off.

Locust Grove didn’t back down and tied the score at the bottom of the first, when number 15 walked and scored a run. The team pulled away for good in the third inning when No. 20 was struck by a pitch and drove in a run. They then scored three runs in the fourth inning, sealing the win.

Pitcher Lexie Delbrey took the loss for the team, lasting three and a third innings, allowing four runs on one hit and striking out six.

Mabry Grace Briggs, Beachem and Mckynleigh Harrell each collected one hit to lead the team.

Determined to try and stay in the competition, the Lady Cats needed to beat their next opponent Loganville to replay Locust Grove in hopes of bringing home a title.

Loganville wanted the same chance, and came out fighting.

They scored two runs in the first inning after a player hit a line drive to right field.

Loganville stayed ahead 2-0, until the top of the fourth inning, when they hit a fly ball and scored another run.

Bainbridge refused to give up, however.

In the bottom of the fifth inning, Harrell doubled on a line drive and brought Briggs home. With Harrell on second, Makayla Hamilton hit a double as well and brought home Harrell.

The Lady Cats were only down by one run, when Loganville hit a ground ball that the Lady Cats reached for on error and scored two runs.

Still looking to make a comeback, the Lady Cats entered the bottom of the seventh hoping for a miracle, and that is what Abigail Gardner delivered. She scored a homerun and brought Briggs home.

The team came out just short with a score of 4-5.

Coach Christopher Bryant said that is what hurt the most.

“They fought until the very end,” he said. “That’s what hurt. Seeing these girls lay it all on the line and falling short.”

The team, although disappointed, finished with a tear-filled hug and a Lady Cats on Three Chant.