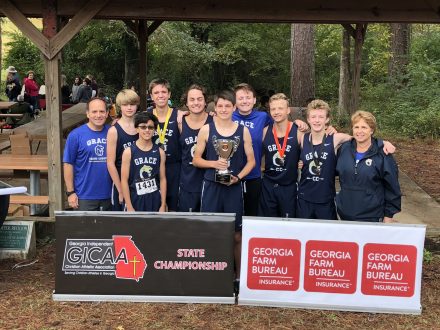 Saturday afternoon the Grace Christian Academy varsity boy’s cross-country team raced to the finish line in Macon, where they finished as State Champions.

The team, coached by Dorinda and Richard Cox, is no stranger to state competition, finishing second and third in past years, but this year they were determined to win the coveted championship.

The coaches said they felt good going into the season this year. They knew they had a good team; they had lost three seniors from last year but during the early meets they soon learned they had two new runners who were in the top seven consistently.

The team worked to build endurance throughout the season, stretching and performing workouts four times a week. The workouts proved to be key in helping the team improve their speed.

“They all did remarkable,” Dorinda said. “Once you get to a certain level in cross country it’s hard to see improvement, but everyone ran faster.”

To compare the times of this season, Dorinda took the average of the top five runners from last year and paralleled them against this year. Last year the time was 19:51 verses a time of 19:13 this year. Everyone had a significantly better time.

“I’m really proud of how everyone ran their best all season long,” senior Chasen Wood said.

The road to state wasn’t an easy one. The team was supposed to compete for the Region Championship the Saturday after Hurricane Michael in Albany, but the meet was moved to Macon.

Runner Jack Holden had been cleaning up his family land and tending to chicken coupes that had been destroyed when he had to go to the meet.

“I knew we would have to give it our all, “ Holden said. “We had a hard week, but it brought us closer together.”

The team came out victorious, despite the circumstances and won region.

“For them to win region was a huge deal,” Dorinda said.

The team then headed to state, where they had an amazing day and won by 28 points.

Gabe Parker and Daniel Jones set an all- time record, while Wyatt Carpenter, Parker and Jones received all state honors.

Parker was happy to have had the opportunity to get this win in Wood’s last season.

“I was hoping to get honored, and hoping to get this win as a team,” he said. “We’ve overcome injuries, but we persevered and wanted it more.”

“I went into Cross Country not knowing what to expect,” he said. “I’m honored to have been on the team.”

Carpenter finished up by saying this season was a great experience and that they have all made each other better in some way.