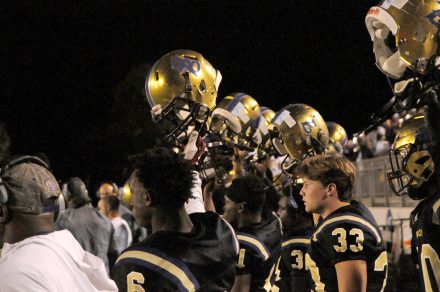 The Bainbridge Bearcats haven’t beaten Thomas County Central in Thomasville since 2004. They’ve won twice there since 1991.

The Yellow Jackets started hot with a 5-1 record before stumbling into a wall once the region schedule began, dropping all three games so far. If there’s an opportunity for Bainbridge to get that coveted win in Thomasville, it’s Friday.

“We have to go over there with a chip on our shoulder,” said coach Jeff Littleton. “I told our team we have to make sure to prepare for our opportunities and get better each day, and not worry about Friday night until we get to Friday night.”

Bainbridge (4-5, 2-1 Region) certainly handled its business last Friday night, racing to a big 49-0 win over Harris County on Senior Night. Running back Caleb McDowell had a big night on the ground, racking up 172 rushing yards on 14 carries and scoring twice. Quarterback Quayde Hawkins was 10-of-13 for 116 yards and three touchdowns. The defense held the Tigers to just two first downs.

The Bearcats will need to bring that level of physicality to Thomasville Friday night.

“Our fundamentals were better,” said Littleton. “Blocking, tackling and executing what was called on both sides of the ball. Special teams were all good. It’s just an accumulation of good practice.”

Thomas County Central (5-4, 0-3 Region) has brought a new spread offense to the team with first year head coach Ashley Henderson, deviating from the veer offense associated with the Yellow Jackets for years. According to Littleton, the region record doesn’t indicate how good the team is.

“They have shown much improvement from the beginning of the year. They started out really, really hot,” said Littleton, acknowledging the strong start but slight falter since beginning the region schedule against Warner Robins on Oct. 5. “We have had a pretty tough region for the most part.”

Adam Tedder (17) is the play caller for the Yellow Jackets. The senior quarterback has passed for 729 yards and scored nine touchdowns through the air. He also has 112 yards on the ground. Another senior, Quay Edwards (28), leads the team in rushing with 707 yards and eight touchdowns.

Tykeem Wallace (8), a cornerback and kick returner, is another standout player Bainbridge coaches have their eyes on. He’s fast, Littleton said, and makes big plays on defense.

A win for Bainbridge on Friday gives the Bearcats a home playoff game next Friday for the first round of state. Thomas County Central has already been eliminated from the state playoffs.

Bainbridge kicks off against the Yellow Jackets at 7:30 p.m.