The Meat House serves those in need after storm 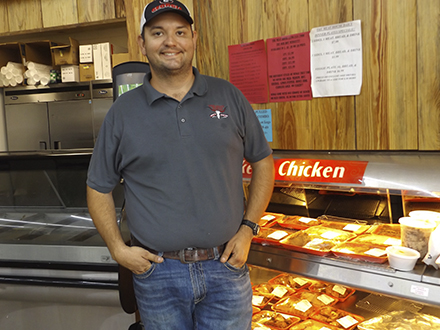 On Friday morning, Oct. 12, following the destruction of Hurricane Michael on the past Wednesday, Bainbridge was still hurting for power, food and ice.

Daniel Barnard and his staff of 25 at The Meat House, located at the intersection of Louise and West Streets, pulled things together and began cooking. At that point, Daniel said he was the only business in Bainbridge that was open. He leased a large generator to give the store power until his electric was restored. Luckily he had city gas to run the grills and smokers and he has been cranking out chicken and pork butts galore ever since. He managed to go through 400-500 gallons of gasoline per day to keep the generator going.

His first day the store opened, it was nearly emptied of groceries by the first rush of customers. He gives thanks to Johnnie and Felicia Harrell, and H&L Distributors of Pelham, who quickly helped him restock with meat and other groceries.

“Nobody had ice,” he said and when a scheduled delivery for Saturday fell through, he located a semi-load of ice in Northern Alabama. Once it was delivered he began handing out free ice. “People have got to keep their food,” he noted.

He also gave out some free dinners to Memorial Hospital, the 911 Center and to those who sought shelter at Jones Wheat School, while delivering smoked chicken quarter legs around the neighborhood. He estimates they cooked over 1000 smoked leg quarters.

From the time he opened on Friday at 6 a.m. until Sunday, he says he was never able to lie down. “I guess I was in survival mode for the community.”

Back up again on Monday, he went in and cooked a special fried fish, oysters and low country boil to feed 1000 linemen and emergency personnel from 11 a.m. to 4:30 p.m.  All seafood was donated by Road Runner Seafood of Colquitt, owned by Guy and Trace Stovall. Barnard also owns the Super B Express in Colquitt and food was cooked and delivered there.

Barnard expressed his thanks to Greg Harrell, construction instructor at BHS, who came to his aid on Friday morning and didn’t leave until Sunday. During that time he helped with many tasks, including some needed security work. He related some incidences of people behaving badly, and he kept staff people on site overnight to keep watch on the property.

He regrets he has not had time to devote to his wife and young son, as well as to tend his herd of cattle that are running all over after the fences came down.

Asked why did he take on this venture, he said, “It’s not about the money. It’s about the community, and my way of giving back.”