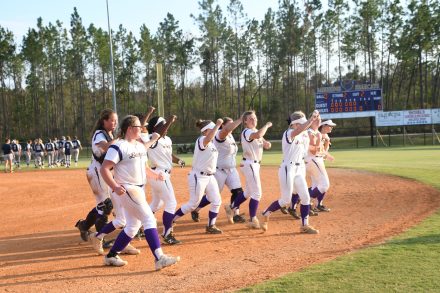 With University of Georgia and University of Tennessee recruiters in the stand, the Lady Cats Varsity softball team played a doubleheader that no fan will ever forget.

The team was up against Statesboro, who they lost against last year. However, this year they were determined to not make the same mistakes.

The Lady Cats opened up scoring in the first inning. Mckynleigh Harrell hit a single to lead off, when Abbey Gardner hit a triple and brought her home, scoring the first run. Halle Cannon then took the plate and hit a single, bringing Gardner home and giving the team a lead 2-0.

Gardner had another great hit in the third inning, when she hit a home run and brought in two runs.

The sixth inning, the Lady Cats sealed the deal with four runs after Harrell hit a double and brought in two runs and Cannon managed a hit for the team.

Lexie Delbrey earned the win for the Lady Cats. She surrendered zero runs on zero hits over six innings, striking out 14 and walking zero.

Delbrey said it was a team effort.

“I knew I had to do my job, and I was counting on them to do theirs,” she said. “They did and we all worked together to come through.”

Ba Rogers took the loss for Statesboro. She went three and two-thirds innings, allowing four runs on four hits, striking out seven and walking one.

Going into the second game, Statesboro put up a fight.

Pitching was even on both sides, with Delbrey striking out 14 and Rogers sitting down 13.

With the score knotted 0-0, Harrell hit a home run at the top of the seventh, giving the Lady Cats the advantage they needed.

The homer was also made to put a smile on teammate, Makayla Hamilton’s face. Hamilton twisted her ankle during the second game and was carried off the field. Trainers were unsure if it was a bad sprain or fracture, but she’s determined to be back for the team in Columbus.

Harrell led the team in hits for the game, while Delbrey got the win, surrendering zero runs on one hit over seven innings and striking out 14.

Delbrey said Thursday night’s game were probably the most important because the team made history. They will now join seven other teams in Columbus as they compete in the Elite Eight.

Coach Christopher Bryant was extremely proud of the team. He said the team of course wanted the win for themselves, but in the back of their mind they wanted to give the community something to be positive about and they achieved it.

“I am just really proud, it was a great effort by these seniors stepping up to the plate,” he finished.

Bainbridge practicing through adverse conditions to take on high-ranked…