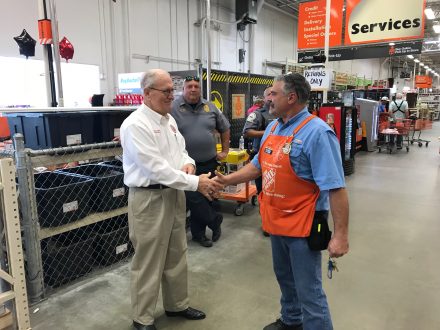 Georgia Insurance Commissioner Ralph T. Hudgens made his way through Bainbridge Thursday to survey damage and speak to residents about the devastations they’ve suffered from Hurricane Michael.

Hudgens’ Office of Commissioners of Insurance worked all last weekend taking calls from people hurt by the storm, putting them in contact with their insurers and facilitating services to help get them back on track.

In Albany, a “claims village” was established at a Home Depot. Around 16 different insurance companies that have anything from a tent with a table and a chair to large motor homes are set up at the location. A few similar locations have been set up in Bainbridge, including an Auto Owner’s Insurance tent in front of the former Charter House Inn.

“They are adjusting claims right there on the spot,” said Hudgens. “Our people organize that, and we’ve done that any time there is a disaster like that. We try to organize a claims village. We put the call out, and they respond.”

After setting up last Friday, the claims village saw thousands of customers. Some agencies have reported as many as 90 claims a day.

Hudgens agreed that nobody in Southwest Georgia was expecting the impact Hurricane Michael would have, but said his office was ready for any outcome.

“We were prepared,” said Hudgens. “All the time we have a consumer services division that is prepared all the time.”

Hudgens met with Bainbridge Public Safety representatives and introduced himself to Bainbridge Home Depot assistant store manager Jeff Hansen. A former resident of Bainbridge, Hudgens also mingled with a few customers inside the Home Depot store, hearing about the damage done to their property.

The Consumer Service Division of Hudgens’ office is available Monday through Friday from 8 a.m. to 6 p.m. to assist Georgians with any insurance questions or concerns they have.