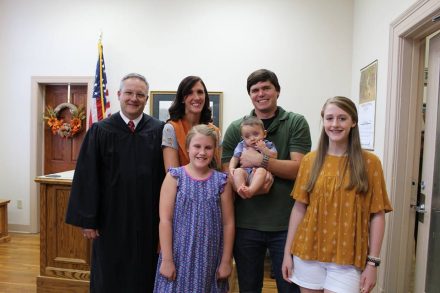 Rachel and Drew Worsley, surrounded by family and friends, celebrated the addition of a new family member Thursday afternoon. The Worsleys adoption of their son, Andrew Jeremiah Worsley, became official in court and they were able to bring him home.

Rachel and Drew both felt a calling to adopt. Their best friends were both adopted, and Rachel thought her dream would never come true after her first husband’s passing. Rachel then met Drew and they decided to follow this dream together.

Rachel said they put together a portfolio, basically selling themselves to prospective parents from an adoption agency out of Lawrenceville, Georgia. They were told “no” 14 times, before they finally got a “yes.”

“It was extremely hard all the times we were told no,” Rachel said. “But, for all of the no’s, God had a plan for the yes.”

They received an email, saying that a parent had accepted their portfolio, and the baby would be born in three weeks. However, this happy news came with a bit of other news. The mother of the child had been using heroine daily, along with meth and marijuana regularly.

The Worsleys were unsure what to expect, but on the day of the birth they traveled to Monroe, where the baby was born addicted to heroine. He was then transferred to a hospital in Lawrenceville, where nurses explained to Drew and Rachel that their son was the worst-case scenario, and he would probably be in the NICU for two months.

This baby was a fighter, though.

He only had to be there for two weeks, which is how he got his name.

Drew and Rachel got to name their new son. They chose Andrew because of the family history, but they chose Jeremiah after Rachel’s favorite Bible verse, Jeremiah 29:11.

“For I know the plans I have for you,” declares the Lord, “plans to prosper you and not to harm you, plans to give you hope and a future.”

The Lord certainly did just that for little Andrew.

Andrew was born at 39 weeks, and weighed 7 pounds and one ounce. His weight did drop, due to the tremors from the withdrawal; this made it difficult for him to gain weight, but he is now a happy and healthy baby.

Drew and Rachel know God played a large role in this miracle. Andrew would constantly be awake and upset in the NICU because of all the babies crying, and as soon as they would pray a peace would just overcome the entire unit, they said.

Rachel still keeps in contact with Andrew’s birth mother, who she said is so grateful.

“She is constantly thanking us,” Rachel said. “She loved how we were involved with our biological children and the fact her son would grow up with siblings, which is something she could never give him.”

Rachel said adoption is something they would definitely do again if the Lord ever led them, but as for now they are excited to announce that after having Andrew since March he is officially a Worsley.