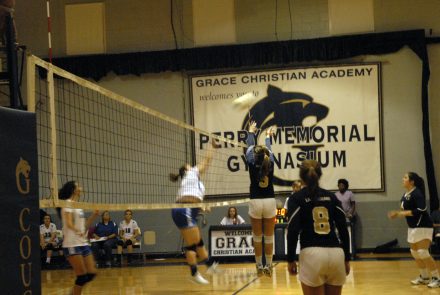 The team came into the game seeking revenge after an early loss against them in the season, but Emmanuel refused to give into them.

Emmanuel won the first set 25-18, but that didn’t stop the Lady Cougars from taking the victory in the second set, winning 25-22. Knowing they needed to win three sets to take home the win, the Lady Cougars kept up their momentum and won the next set 25-18.

After two sets of nothing but net, Emmanuel found a way back into the fight in the fourth set and beat the Lady Cougars 25-18.

It all came down to the fifth and final set. The crowd could see the student section up on their feet and cheering for the team to take down this out of region rival.

The game went point for point. The team only had to score 15 points, but both teams were tied at 14, meaning someone would need to score at least two points to take home the victory. That is when the Lady Cougars gave it all they had and left everything on the court, coming out with a 16-14 win. The student section ran onto the court, while the teammates hugged each other and their coaches for this amazing victory.

“We started out with a lot of unforced errors, but they turned it around and just pulled together as a team,” Wells said.

Wells admitted to being a bit nervous during the game, but she knew how bad the girls wanted it, so in her heart she said she knew they had it.

She was especially proud of Avery Andrews and Dani Parker who really stretched themselves to make plays. Wells said she thought some of the balls were long gone, but those two kept them in play.

Kate McRae led in serving aces with seven, while Caroline Wells led in kills with 10. Emma Benedict, the setter had a surprisingly large amount of kills as well as Lainey McRae. Lainey also was reported to have made two important saves for the team.

Wells said she hated to lose, especially twice so she was thrilled they pulled this one off and it was a big win for the team.