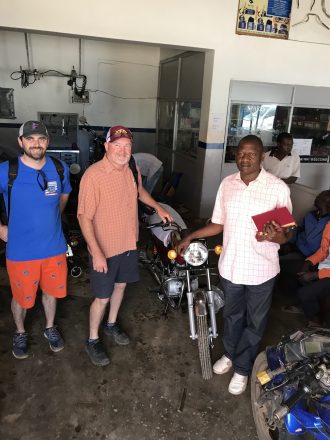 Kevin Horton recently returned from a mission trip to Uganda, where he gained a totally new perspective on life and his surroundings.

Horton and a group of others from West Street Baptist Church and Southwest Baptist Church left Tallahassee on August 11 at noon and arrived in Uganda Monday morning at 5 a.m., where they stayed for the remaining seven days.

Horton had been on previous trips to Uganda, but this trip was different. The group was focusing on an area called Budiba, located in the bush of Uganda.

Budiba’s village is built around the church and local children’s orphanage, Horton said. Most of the people rely on the church for all of their needs, so the group was able to offer some relief for the church during the week.

One of the things Horton’s group immediately noticed was the nagging cough the children had, along with white spots on their heads. Horton’s fiancé was in attendance and worked with another nurse to diagnose the children who had the cough with tapeworms. The white spot indicated signs of malnourishment, so the group went into town and quickly bought medication that the village may not otherwise have access to.

They provided the village children with medication that would prevent Malaria, vitamins that would restore some of the nutrients they were missing, along with de-worming medication.

Horton said that was one of his two favorite days of the trip. They were able to treat hundreds of kids who desperately needed medical attention.

Horton’s other favorite day was traveling into the Ugandan mountains and meeting remote pastors. The pastors walk from house to house and town to town to individually preach the word to people.

“In some instances, they walk miles up and down the mountain,” Horton said.

One of the remote pastors who travels the farthest, the group gifted a boda boda, which is the main source of travel in Budiba.

“This way he’s not walking so much and has more time to get to people and spread the word,” Horton explained.

The group also brought gifts from Bainbridge to provide the children and local pastors. Every person who flew to Uganda filled four tote bags, so in total they were able to provide 24 bags full of clothes, shoes, Bibles and materials for them to host Vacation Bible School with the children.

Most of the items provided were donated or bought with money raised from fundraisers for their mission. Horton wanted to especially thank Pepsi, Walmart, Godwin Jewelers and Southwest Georgia Outdoors. Thanks to them, they were also able to provide shirts and ties for 25 pastors who did not own any nice clothing.

The group also was able to provide hand sewn dresses for the girls in the orphanage that had been made by a Southwest Baptist Church member. Horton said they are always careful not to bring in too much though.

The people of Budiba are extremely resourceful, he explained.

The group did introduce some new acitivities to the children during Vacation Bible School and had nighttime discussions with the adults during the Bible study. Horton said they would often discuss the trials they face, and while their situations are different, they never wanted the villagers to feel alone.

“We don’t want them to think we are without struggle,” Horton said.

Horton, along with other people from his mission group hope to return to Budiba in February and continue their work with the villagers. They would love to see doctors or farmers come along with them, so they could diversify the help they are able to give.

For people who would like to help the villagers, but are unable to make the trip Horton asks for prayers. The group also is collecting monetary donations to help the orphanage build a fence. There have been reports of men coming in the night and raping young female orphans and they believe a fence would keep them out, Horton said.

Horton invites everyone to keep up with their mission work and journey on Facebook at Budiba Mission or visit their website wordsoftruthteachingministries.com to find out more information.

Saturday morning ladies of all ages could be found in the Decatur County Sheriff’s Office courtroom attending the ladies handgun... read more