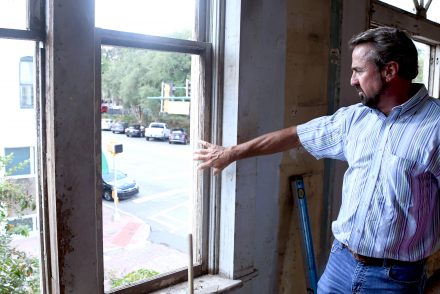 Doug and Sherry Young have finally gotten the opportunity to bring their vision and passion for downtown Bainbridge to life.

After years of waiting for the right building to become available, the Youngs purchased the one at the corner of Broad and Water streets. They are turning the bottom floor into a storefront, soon to be occupied by SkinCare by Jennifer, who is currently located farther down Water Street.

The top floor will be transformed into a couple of two-bedroom, two-bath apartments.

The Youngs have looked at old photographs of the building and examined plans dating back 100 years for how the building used to look, back when the building was called The Eagle Saloon. They want to recreate as much of that aesthetic as they can on the outside.

“I want to get as close to that picture as we possibly can,” said Doug.

While the outside will have the classic, vintage downtown look, Doug stressed the inside would be fully modern. Sherry plans for the upstairs apartments to feature an industrial style, with exposed ventilation and high ceilings.

Doug, owner of PDC Construction, said his passion for downtown was lit when he worked on the Decatur County Courthouse renovation more than 20 years ago. When the downtown building came available a couple of months ago, he and Sherry jumped on it.

They’ve since fallen in love with it and all the pieces of Bainbridge history it contains. This week, his crew uncovered a window that has been walled shut for decades. It still has some of its original glass.

Below the building is a basement with brick columns. It was filled with trash when the Youngs bought it, but they are hoping it can be used for something much more interesting in the future.

Instead of scrapping pieces of the building’s original pine wood, the Youngs want to use it to build islands in the kitchen. Small fireplaces, although non-functioning, still sit against the outer walls and provide an extra detail to the space that Sherry loves.

The old staircase on the Broad Street side will be knocked down. A new one will be built on the Water Street side, where the original staircase used to reside.

“Every day we uncover something old and just love it,” said Doug.

“We have a passion for downtown.”

Kevin Horton recently returned from a mission trip to Uganda, where he gained a totally new perspective on life and... read more