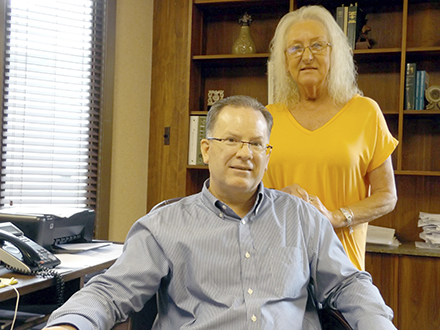 This Friday, Wanda Miller will retire and say goodbye to a 39-year career spent with Three Rivers Credit Union. She takes with her not only a great deal of knowledge about the business of credit unions, but the interesting history of this particular credit union.

Three Rivers was first sponsored by Amoco for their own employees, and was a spin off from their plant in Nashville, Ga.

The offices were contained within the Amoco plant; but as employees from other industries began to join, they found it necessary to establish their own building.

The company built a new building at the corner of Brinson Airbase Road and US 27 North, an ideal location for the close proximity to all the manufacturing plants in the industrial park.  As companies began leaving that area, Three Rivers made the decision to close that building and conduct all transactions at 504 West Shotwell Street in Bainbridge.

A photo dated June 1993 speaks as to the amount of dedication Ms. Miller has put in to the business for 39 years. It shows her painting one of the inside offices of the new building.

She says her career began as an employee of Amoco, starting in the HR department while she worked her way up to the manager position of the credit union.  This included putting herself through two years at Bainbridge College to obtain her associate degree in business.

As for her plans after she no longer has to set the alarm, she claims to be a beach bum. She and a friend enjoy the Alligator Point beach and doing some foreign traveling. She also plans to see more of her son and grandson who reside in Illinois.

She says what she will miss most are the people – both the employees and the members. “They have become like a family,” she explains.  She has seen members bring in their children and grandchildren as new members to the credit union.

She is turning over the books to Thomas F. Joyce, incoming CEO. He moved to Bainbridge in June after living and working in Germany for 20 years. He was stationed there while in the U.S. Air Force, married a German woman and remained in the country working for a large credit union. Originally from Michigan, he now makes his home on Lake Seminole.

Three Rivers will host a farewell party for Ms. Miller all day on Friday, offering food and fun for all members.

Pope promoted to publisher of The Post-Searchlight

Mark Pope has been named publisher of The Post-Searchlight and president of Bainbridge Media LLC. Pope has been with The... read more