Band camp gets music and moves cranked up under new leadership 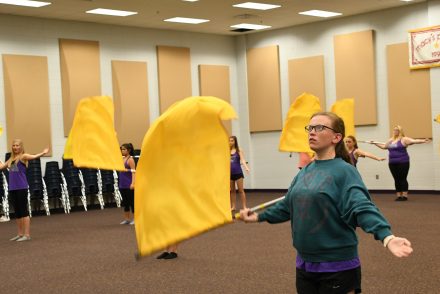 Bainbridge High School band camp is well underway, with the percussionists, colorguard and danceline learning routines to wow the crowd this football season.

Monday afternoon colorguard and danceline worked to learn the first of three different performances they will showcase later this fall.

Danceline sponsor, Samantha Palmer said danceline had six new girls and 11 returning dancers, but the team was already performing well together and ahead of schedule.

In order to create the routines Georgette, De’Andra Shields is attending the camp for the entire three weeks and teaching them the choreography.

Shields said it was a little difficult to choreograph three different routines for their season, because she didn’t want to do anything the team wouldn’t like. Instead of focusing on difficult techniques, she wanted the team to be sharp in their motions. She is working with them on the basics of arm placement and how to do a pomp routine.

“Some of these girls have never danced or entered a studio,” Shields said. “It can be challenging, so I just want them to learn the importance of being sharp and on their spot at the right time.”

Colorguard sponsor, Lori Brown also had a guest come in to teach her team three new routines for the season.

Brown said the team has eight new girls and 10 veterans this season. Brown brought in Aurielle Ventura from Norcross to help the girls perfect the basics of flag twirling and dancing, because some of the girls had never held a flag before tryouts.

The camp will continue for the next two weeks, when the teams will eventually hit the field and put all their work together to create a show-stopping performance.