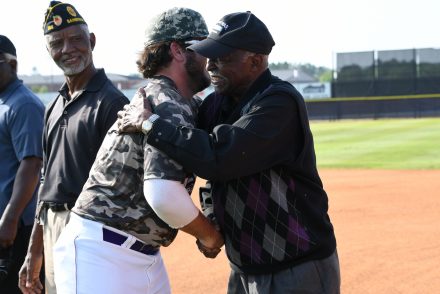 They were applauded by both the Bearcats and the visiting Cairo Syrupmakers for their selfless commitment to protecting our country.

“I hope that our kids will understand what a privilege this is, to play a great game, go to a great school, get a great education,” Bainbridge coach Brian McCorkle said. “And it’s all due to the (veterans) that you see here and the thousands of thousands around the country and stationed around the globe right now.”

Luther H. Conyers, Jr., a former Bainbridge city councilman and veteran, spoke to the Bearcat team before the game about

“It was a good experience,” said Conyers. “I enjoyed it. We talked about preparing yourself in school and making sure you get it between your ears. No matter how good you are at baseball, one bad move on the field can end your career. But if you have it between your ears, you can make it.”

He talked about how that same lesson parallels with life, too.

Conyers fought in the Korean Conflict, where he received the Korean Service Medal with three bronze stars. He has spent his entire life as a public servant in Decatur County, has been inducted into the Georgia Municipal Association Hall of Fame and has received countless citations and awards for his community service in the Bainbridge community.

Dani  Parker sang a beautiful rendition of the National Anthem and Conyers threw out the first pitch to Bainbridge catcher Griffin Long.