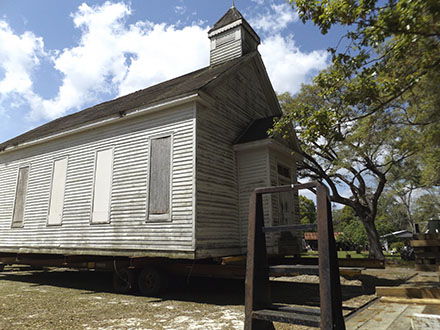 A bit of Fowlstown history is moving on down the road this week.

The little old country Methodist church that once served the turpentine/agricultural community of Fowlstown has a long history with the Swicord family. And now, J.B. Swicord is moving it a little over one mile down the road to his farm, where he hopes to restore it and perhaps use it for a rustic wedding chapel.

J.B.’s father owned all the land around the church and the family lived next door to it.  J.B. grew up attending services there. He recalls it used to be his job to go down and start a fire in the winter, or open the windows in summer. He would ring the bell to let parishioners know it was time to come worship. As an added note, he says it was the custom to ring the bell once for every year Jesus spent on earth.

The church was part of a charge with the Faceville Methodist Church.

In 1962 they ceased operations in Fowlstown, and the church sat empty. After the trustees attempted to sell it, J.B. decided to purchase it, which he did in 1967. At that time he had no idea what he would do with it. He just knew it had to stay in his family and the Fowlstown community.

It has turned out to be quite an operation to get it moved. It has been sitting on skids on a large moving trailer attached to a truck for a couple of weeks. The move involves a great deal of permitting with Grady EMC, the Georgia Department of Transportation, etc. etc., before the truck can leave the grounds and go down the highway.

Once he gets it to the farm, he plans to replace the windows right away and begin restoring it in other ways. It needs a new roof and a paint job on the exterior. On the inside, the pews and pulpit chairs are gone, having been moved to the Southern Methodist Church in Bainbridge; but the beautiful old altar rail is still in place.

J.B. says he has a nice setting for it down on the farm that has been in the family for over 100 years. He has a grandson getting married in November and he would like to have it fixed up in time for that, although he thinks they will probably be married outdoors in front of it.

The church has the classic historical design of the one room country church, with a small vestibule entry and a bell steeple over the front door.

Swicord has recorded the church history in Decatur County Past and Present. The first Fowlstown Methodist church was built on the site of the Greenshade Cemetery in 1855. That church building was replaced in 1886 with the current subject building on Georgia Highway 309 South, just south of Greenshade Road.

He remembers one particular minister, a Rev. Bates who would have been the grandfather of Larry Lennard. At the peak of the church’s life, he said the older Reynolds and Willis families all lived in the community and attended church there.

In the 1940s the little community had four stores in town. Now, there is just a post office and a fire station, as the community continues to be actively involved in agriculture.

It will be interesting to see how the little church looks and serves in its new home.