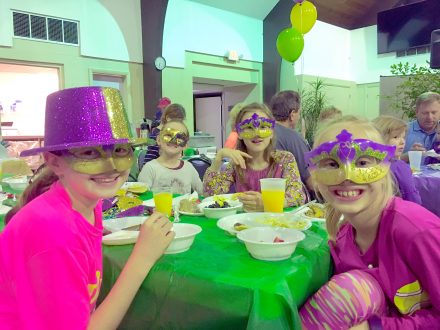 Tuesday night Bainbridge First United Methodist Church celebrated the end of Mardi Gras and the beginning of the Lenten season with a pancake supper.

Meredyth Earnest said this year’s pancake supper was fantastic and they had almost 150 people in attendance. All the money raised from the supper is donated to the Methodist Home for Children and Youth, headquarted in Macon, Ga.  While their donation this year was significant, the reasoning behind this annual tradition holds great significance as well.

The pancake supper was held the Tuesday before Lent and was originally called “Shrove Tuesday.” The word shrove is the past tense of shrive, which means to hear confessions. Because Lent was a time of confessing and fasting, people didn’t have parties or eat rich foods such as butter, milk and eggs during Lent. However, people couldn’t afford to waste these foods so on the Tuesday before Lent they would use up all of the foods. The day then became known as “Fat Tuesday” because of all the foods with fats being consumed.

The children also play a large role during the “Fat Tuesday” celebration. Each year, BFUMC has a children’s parade complete with noisemakers and masks. The children parade through the J.O. Smith building to jazz music, while the parents and other guests enjoy the festivities. Following the parade, the children gather outside to prepare the ashes for Wednesday night’s Ash Wednesday service of worship. The children take the dried palm branches that were used at last year’s Palm Sunday service and burn them. They later mix them with oil and use them to make the sign of the cross on the heads of those in attendance.

BFUMC observes Lent beginning at the Ash Wednesday service. For 40 days, excluding Sundays, members of the congregation observe spiritual disciplines. They abstain from certain things that stand in the way of a relationship with Jesus Christ. They take the brass and shiny objects out of the sanctuary and replace them with simple, wooden items during the season. They also participate in the Lenten Luncheon series during Holy Week with other area congregations.