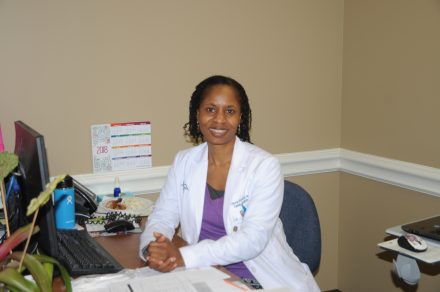 After spending years overseas working as a battalion surgeon and traveling as a locum tenens, Dr. Gloria Browne, MD is glad to finally have a place to call home.

Dr. Browne is the newest addition to the Amelia Medical Plaza, where she practices family medicine. She graduated from Brown University Medical School in 1999 and began her residency at Martin Army Community Hospital in Ft. Benning, Georgia soon after.

Once she completed her residency, Dr. Browne was transferred overseas because of her military status and worked in a community hospital in Stuttgart, Germany. After three years of living in Germany, Dr. Browne was deployed to Iraq, where she became a medical advisor to the battalion commander and oversaw the training of physician’s assistants. This job allowed her to confer and consult with the trainees before they were sent to take care of soldiers on the battlefield.

Once her tour in Iraq was over, Dr. Browne returned to Germany and extended her stay there for six months before moving to Korea for one year.

After years abroad, Dr. Browne returned to the U.S. and began another year of working active duty at Ft. McPherson in Atlanta. In 2007, Dr. Browne joined the reserves, where she now is a Colonel at her base in Mobile, Alabama.

During her time in the reserves, Dr. Browne started working as a locum tenens, or traveling doctor. She was licensed in Georgia and Alabama and would help at various community-based clinics. While she mainly focused in those states, Dr. Browne traveled as far as Maine to help any patient she could.

Dr. Browne sees this as something that makes her special and different from other doctors.

“I’m good with people,” she said. “ Traveling all over the world, especially being in the military allows my personality to get along with everyone.”

She said she focuses on really educating her patients, while trying to make their health better. She opens their eyes to things they can fix in their lifestyle and in their nutritional habits.

During her time as a locum tenens, Dr. Browne received a three-month contract with the Amelia Medical Plaza, but she soon realized three months wouldn’t be enough. She fell in love with the Southern hospitality and the Spanish moss and realized this would be a good place to stay.

Dr. Browne is now a permanent doctor at AMP, where she is seeing new patients and has open slots available for appointments.