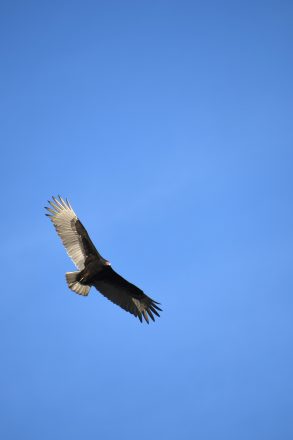 Many vultures call the Bainbridge water tower on the bypass home. And the number seems to be increasing, as they spread out to additional resting areas. It has been reported that they also enjoy perching in the high points at Centennial Field.

They can be seen circling neighborhoods as they ride the thermal waves, searching for food.

These questions were posed to The Post Searchlight recently by a reader, and we have been making an attempt to learn more about them.

Our first point of contact was to Georgia DNR Nongame Conservation Section where we spoke a length with wildlife biologist Todd Schneider.

Schneider began with one statement that may be surprising. Vultures are federally protected birds. It is illegal to shoot them.

There are two kinds, black buzzards and turkey buzzards. Most are considered migratory, with the black ones going to South America for the winter. We probably have both varieties living in Bainbridge.

It is important to know they are carnivores that feed on carrion, or dead species. They will not carry off your small dogs or cats.

They roost in numbers, by the dozens, high up and away from ground animals, such as raccoons, which apparently have developed a taste for vulture meat.

That tends to explain why they like the water tower.

According to Schneider they soar up to a few miles (10) away from their home roosts, scavenging for food. They especially like road kill.

Schneider said the number of complaints about vultures has risen substantially over the last five or six years. He proposed one theory that they are being dislodged as more people are moving into their habitat; but their numbers are definitely increasing. Schneider said he sees more of them in other towns with water towers as well.

A call to Robin Goodloe, biologist with the U.S. Fish and Wildlife Service in Athens, Ga., elicited her opinion that they have expanded their reach in recent years and are definitely multiplying.

She offers a bit of hope with the knowledge that birds along the eastern coast of the U.S. migrate south and that if they are in Georgia at this time of year, they will be leaving soon to fly back up north.

However, that only applies to the ones that are migratory.

She reiterated that they are protected under the federal migratory bird act, so you cannot shoot them.

Perhaps shotguns or other noise makers could be set off repeatedly to scare them away; but in all likelihood they would just return.

The question remains. Where and what food sources are they finding here that are sufficient to feed and sustain such large flocks?

We were unsuccessful in contacting our own resident birdwatcher and retired wildlife biologist, Oscar Dewberry, but he might be able to shed further light on the subject.

Members of the Firehouse Arts Center opened their winter exhibit with a public reception on Thursday, January 18, at 6:30... read more