Arrests made in relation to Ag-Pro thefts 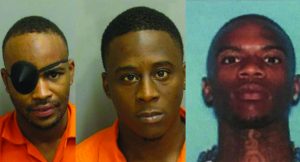 Three arrests have been made in relation to the AG-PRO (John Deere) theft that took place in Bainbridge on Nov. 30, 2017.

Around noon Wednesday, Deandre Marquese Hale, 28, was arrested by the Montgomery County Sherriff’s Office and charged with “Fugitive From Justice.” This afternoon, the U.S. Marshal’s Service arrested Darius Demichael Pitts, 26, on a Felony Theft charge. Kenneth Kieuntrel Jordan, 27, was arrested in December on a Federal Firearms charge.

Further charges are pending as the investigation continues.

An investigation was opened following a break-in and theft at AG-PRO in Bainbridge.  Bainbridge Public Safety Investigator Chip Nix watched video surveillance footage, identified numerous vehicles and determined there were at least six subjects involved in the theft.

On Dec. 6, the Dothan Police Department (Alabama) contacted Nix to make him aware that SunSouth (John Deere) in Dothan was a victim of theft on the evening of Dec. 5.  A large amount of lawn equipment, vehicles, and trailers were taken from the business.

Investigator Terry Nelson of the Dothan Police Department obtained video footage from City of Dothan traffic cameras which showed a white four-door passenger car, a truck matching the one stolen from SunSouth in Dothan, and two additional vehicles believed to be involved in both the Bainbridge AG-PRO theft and the Dothan SunSouth theft. In cooperation with the Opelika Police Department and the Lee County Sheriff’s Department, the Dothan Police were able to discover persons of interest, and had leads to the possible location of some of the stolen equipment.

Investigator Nix and BPS Investigator Larry Funderburke traveled to Opelika where they joined forces with members of the Opelika Police Department and the Lee County Sheriff’s Department.  Information led investigators to an abandoned metal shop property in Lee County (Opelika) where twelve zero-turn lawn mowers, three trailers, and a SunSouth service truck were recovered.  Two vehicles were positively identified as those used in the Bainbridge AG-PRO theft, as well as in the Dothan SunSouth theft.  The vehicles were a 2008 Chevrolet Crew Cab 3500 with a utility bed, and a white Dodge Dully with a flat bed.  The Chevy truck was shown to be one of four vehicles stolen out of Crenshaw County, Alabama, on Nov. 6.

Investigator Nix made contact with a resident living in close proximity to the abandoned metal shop where the equipment and vehicles were found.  The resident showed Nix a surveillance video.  The video showed a convoy of vehicles, including a white four-door passenger car and a dark gray Dodge four-door truck pulling a trailer with equipment, entering the neighborhood.  Several individuals were also seen on the video footage.

Investigator Nix and Investigator Funderburke traveled to Montgomery and met with investigators from the Montgomery County Sherriff’s Office. Information related to the stolen vehicles and obtained from the videos led Investigators to identify DeAndre M. Hale of Berkley Drive, Kenneth K. Jordan of Cross Creek Drive, and Darius D. Pitts of Windwood Drive in Montgomery as persons of interest. Vehicles used in thefts in Bainbridge, Dothan, Opelika, and Montgomery are now linked to multiple individuals, and information is being used to identify all of the persons involved.

“It’s like a domino effect, one bit of information leads us to a person of interest, and that person leads us to another,” Nix said. “We are also linking these persons to multiple thefts.  Through the cooperation of multiple law enforcement agencies, warrants will be issued as this investigation continues.”

This year’s flu outbreak has been described as one of the worst in the U.S. in years, killing almost 100... read more