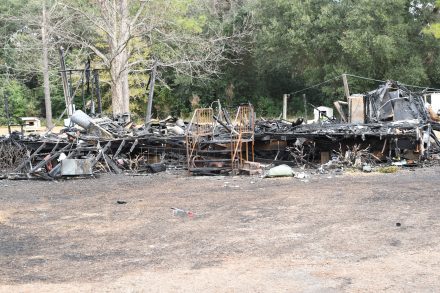 A mobile home was destroyed in a fire Sunday night on Beaver Circle. Firefighters are currently investigating the cause, but with little remains of the home left, they seem to be at a stand still.

Tabitha Minchew was visiting a home two doors down when she noticed some flames while looking out the back door. Minchew observed a neighbor busting in the windows to the home, thinking someone was still inside.

After seeing no one was inside, the neighbor called DCFR and the homeowner, Benny Williams.

Chief Charlie McCann said when the first unit arrived on scene the structure was already totally involved in the fire and the home was a total loss.

Once Williams heard his home was burned to the ground, he knew he had to go get his wife. His wife was at church in Attapulgus, but suffers from severe depression and he is her caretaker. Williams said his wife began crying, but he told her there was nothing he could do.

After a brief survey, DCFR still has absolutely no idea of the cause, McCann said. However, Williams said it was probably one of the faulty wires or old space heaters they were using.

Minchew said she heard no noises of any sort; the home just became engulfed in flames before her eyes.

“It was unbelievable,” she said.

Williams and his wife are currently staying at a hotel, but have a cousin who is going to try and set them up with an apartment. Williams’ wife wants to move back to Beaver Circle, but Williams said he does not have the financial means right now. He hopes within a year he can get another used trailer and clear the land and rebuild his property there.

Williams is so grateful for everyone who has helped them since the fire occurred on Sunday.

“I want to thank everyone from the bottom of my heart,” Williams said. “Y’all made a old hippie happy enough to cry.”

Williams said even when he was at his poorest he gave to charities, and he believes that because of that people have been willing to turn around and give to him now.

If anyone believes they can help in any way, they can contact Williams through his Facebook page or reach out to the Red Cross.

DCFR will continue to investigate the cause behind this sudden fire, but if anyone noticed anything suspicious or of note Sunday evening they are prompted to call 229-248-3011.