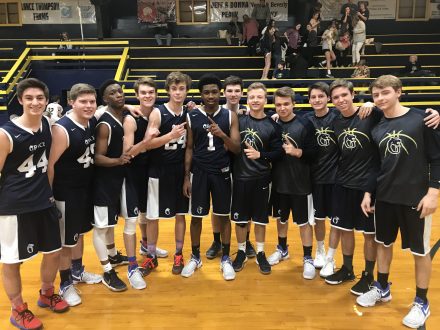 The Grace Christian Academy Cougars put their game away with Fullington last Friday with just 2 seconds left on the clock.

De’Andre Rogers rebounded a missed shot from Clay Wells and bounced it back into the basket, giving GCA a 47-46 lead that held until the buzzer.

Rogers finished with 8 points, going 4-for-7 from the field. He pulled down 5 rebounds throughout the night.

Jaylen Jones led the way on the scoring front with a stout 21 points. He was 10-for-20 from the field and hit a free throw. He also had 6 rebounds and 4 steals.

McRae had a double-double, scoring 16 points and grabbing 10 rebounds. He drained two 3-pointers and went 2-for-7 from the free throw line.

The Cougars trailed 15-11 at the end of the first quarter, but came back in a big second quarter to take the lead 27-24. GCA continued their lead 37-30 at the end of the third quarter, and relinquished 16 points to Fullington in the fourth.

The Lady Cougars didn’t have the same luck against Fullington, losing 61-28.

The Cougars and Lady Cougars played Tuesday against Grace Christian in Valdosta and will host Community Christian Thursday at home.

BHS wrestlers medal in Top 3 at Cairo meet, region tourney around the corner