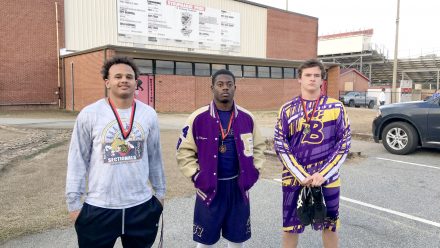 BHS wrestlers medal in Top 3 at Cairo meet, region tourney around the corner

“We had a great start to the day as all nine wrestlers either had bye’s or a win in the first round,” Coach Chad Smith said. “As the second round rolled around, a few Bearcats fell in losses. As the day progressed we were left with four Bearcats still fighting for spots. All placed except Kendall Glover at 132-pounds, who lost his third place match in overtime with his opponent from Colquitt County.”

The team will travel to Kathleen this weekend to Veterans for the Traditional Region Tournament.

Going into the tournament, Smith said the team has several wrestlers that are seeded high. Randy Fillingame, Storey and Bruce are all No. 1 seeds in the region, followed by Kendall Glover at No. 2 seed and Curtiss Watson, Tanner Brown and Carson Love all at No. 3 seeds. The Top 4 will advance to the Sectionals West Georgia tournament Feb. 1-3. The Top 8 from Sectionals will move on to the final state competition.

Storey, a returning state placer, is a favorite to win the 5AAAAA State Title. He finished fifth last year.