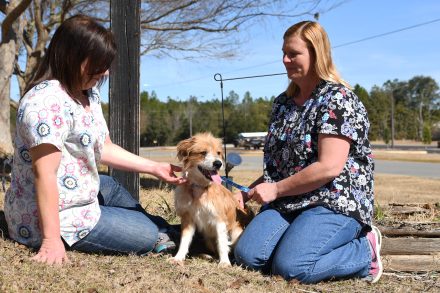 As the leaders of the Bainbridge-Decatur County Humane Society prepare for their second Arts for Animals fund raiser, they receive word that the shelter has been named to the list of top 30 dedicated animal shelters in America. The designation was made by an organization called Top Dog Tips.

When contacted on Monday of this week, Shelter Director Ashley White said neither she nor board president Dennie Nichols had any idea who had nominated the shelter for this award. “We were pleasantly surprised and thankful,” she added.

The Bainbridge shelter joins the ranks of such esteemed organizations cities such as Phoenix, Arizona; Humane Society of Sarasota County, Fla.; and the Humane Society of Memphis, Tenn. The list speaks of how each group was organized and what they do by way of caring for animals.

Of the Bainbridge Society it says: “It was formed 15 years ago, in 2002. Created as an answer to several other shelters before it that couldn’t manage to do what the animals of Decatur County needed them to, the Bainbridge Humane Society is an exemplary open shelter that accepts all lost, wounded, sick, or unwanted animals, treats them and finds them new homes.”

What it doesn’t address is the difficulty with which the Bainbridge shelter workers do their jobs in such inadequate circumstances.

The dilapidated buildings often flood, and there is not enough space to isolate and serve the differing needs of the animals.

In 2015 the Humane Society began a capital building fund drive to construct new facilities on five acres of land that was donated to them by the Earl Nichols family.

At this time their goal is to begin breaking ground by the year 2019. In order to achieve the goal, the Society needs to reach their monetary goal of $650,000. With the generous help of the Fogg Charitable Trust, and various fundraisers, they have already raised $365,000 toward that end. And, they have an anonymous donor willing to match whatever funding that is raised within the year.

They are more than half-way toward their goal, and there are many different ways individuals and corporations can still help. In addition to supporting the Arts for Animals party at the Firehouse Gallery on Saturday, February 3, they can choose donate to any one of a list of items needed. A personalized plaque will be placed at the entrance to any room purchased. Room costs range from $5,000 to $50,000 and include all equipment needed for the procedures conducted there. Personalized bricks up to 250 can also be purchased with a $100 donation.

As a matter of clarification, the City of Bainbridge and Decatur County combined provide for 51 percent of daily operations for animal care. The other 49 percent has to come from fundraisers and private donations. The Society is responsible for raising 100 percent of the financing for the new facilities. All donations are tax deductible as the organization is a non-profit 501 C (3) organization.

The Shelter invites the public to come visit their current location and see for themselves the need for a new facility.

Tickets for Arts for Animals are $35 each, or $60 for a couple, and are available from the shelter on Cox Ave.