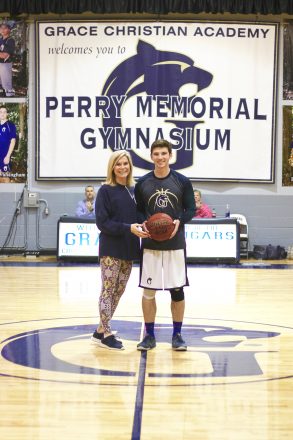 Grace Christian Academy senior Cougar Sam McRae couldn’t of had a better comeback after a knee injury. He scored his 1,500th varsity point on the way to GCA’s 48-41 win over Brookwood Academy Thursday.

Jaylen Jones did a lot of the heavy lifting on offense. He poured in 23 points, going 7-of-20 from the field, hitting a 3-pointer and draining 8-of-13 free throws.

McRae put up 13 points, and also had 4 rebounds and 4 steals. Jared Duke had 8 points and De’Andre Rogers and Clay Wells each had 2 points.

The Lady Cougars put up a fight against Brookwood, but dropped the match 49-21.

The team got off to a strong 9-4 start after the first quarter, but relinquished 22 points in the second quarter while only adding 4 points to the board themselves. The Lady Cougars were down 36-17 at the end of the third quarter.

Caroline Wells led the Lady Cougars in scoring with 10 points, and she pulled down 6 rebounds as well.

Emellia Woodrum had 7 points and 2 steals and Mallie Andrews scored 2 points and pulled down 2 rebounds. Lainey McRae and Ella Harrell each had a point.

The Cougars and Lady Cougars play Tuesday at Georgia Christian in Valdosta.