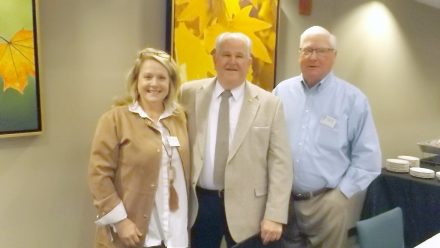 Decatur County Sheriff Wiley Griffin spoke to Bainbridge Rotary this week, with an emphasis on what he called “an escalating problem—Scams.”

There have been several scams on several topics, such as being told you are a big winner, but you need to send money to access the winnings. There are also those calls that purport to be from the IRS saying you are behind on taxes and are about to be arrested unless you pay up a certain amount. Then, there is the one about locking your computer and you must send a substantial sum to get it unlocked.

Griffin says the best thing to do is just hang up. Once they get you, they will keep calling you back. He cited examples of victims who just kept sending money, again and again.

“Please do not send that money,” he advised.

He said the sheriff’s office is trying to get information to stop it, but if it is coming from overseas there is nothing they can do. However, Griffin says many of the calls are coming from prisoners in jails who have managed to get cell phones. They are using drones to fly cell phones into prisons.

Griffin went on to describe some of the programs his department is using to fight or prevent crime. Specifically he mentioned the Neighborhood Watch program, which encourages private citizens to work together to combat crime, the CHAMPS program for 5th graders, where they give the students tools to make better choices. There is a ladies only gun safety class taught by the Sheriff’s Department, and security services offered to many organizations, such as churches.

In response to a question about the opioid epidemic, Griffin replied that it is a huge problem, while adding that basically you can get all the opiates you want from a doctor. A person who suffers from chronic pain can easily become addicted to pain relievers. He stated that more people die from prescription drugs than illegal drugs. “Good people can get addicted,” he advised, while adding, “I don’t know the solution.”

He believes it will have to be addressed with education

Winter Weather Advisories have been issued for SE Alabama, parts of SW Georgia, and the FL Panhandle from late Tuesday... read more