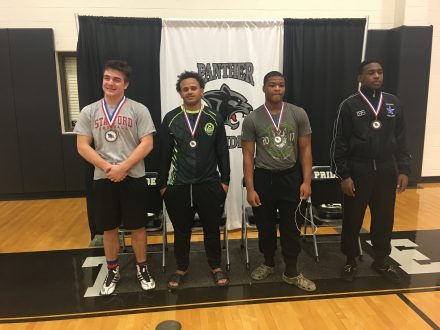 The Bainbridge wrestling team traveled to the Smiths Station Invitational, where 17 teams were represented in each weight class. The Bearcats placed seventh overall after the first round, winning 6 out of 9 matches.

The second wasn’t as friendly to Bainbridge. We team dropped to 11 in team points while still having all wrestlers in.

On the second day of competition, Carson Love and Jebez Minnis were put out in the third round. Shortly after, Thomas Davis and Tanner Brown fell to their opponents for their second lose. In the placement rounds, Bainbridge had five guys still fighting. Tre Storey was wrestling for the championship against returning Alabama state champion Tanner Woodall of North Jackson. Kendall, Curtiss, Randy and Josh were all fighting to finish in the top five.

By days end, Storey lost 8-4 to finish 2nd and the rest of the team finished an impressive 5th.

“This was a tournament where some of the best wrestlers in Georgia, Alabama, Florida and Tennessee were in attendance.,” coach Chad Smith said. “It was a great tune up for upcoming regions tournament.”

Smith said he was impressed with the effort, even by most of the guys, “but Storey and Kendall really stood out to me with their offensive performance. Kendall has come a long way with being more offensive in his wrestling style.”

Randy Fillingame came away with the fastest pin award with 8.66 seconds. Thomas Davis did well in the 126 class as well. Curtiss Watson has his moments of dominate wrestling, and Smith said he is working on getting him to be more consistent in his offensive attack. Tanner Brown got a win, but had a tough time overall at the 160 pound class. He is working on dropping the weight for Region, which will drastically help him out.

Josh Bruce, a first year wrestler, continues to prove he has heart and loves to win.

“He is a work in progress, but man, he really wants to win,” Smith said.

Next week the team travels to Colquitt County to take on the Packers and Dougherty County out of Albany followed by the Cairo Syrupmaker Invitational.

The Bainbridge Bearcats got last weekend off to a hot start by beating Cairo in a close match 48-45, but... read more