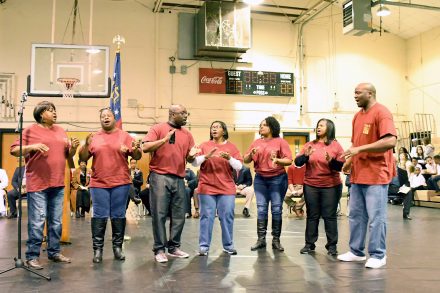 The program encouraged people of all races to join in this monumental 50th commemoration of Dr. King’s death. The focus of the program was “uniting in divisive times,” even the nation seems to be tearing people apart.

Superintendent Tim Cochran spoke at the memorial program and pointed to a verse in the Bible that served as a reminder about unity: Mark 12:31

“Love your neighbor as yourself,” Cochran repeated.

Following Cochran’s remarks, Mr. Brock Washington, President of the Decatur County NAACP spoke on the one thing that everyone can do to fix the divisiveness, which is voting.

Voting was a privilege that people of color did not once have, and now it is often taken for granted. If one wants to see a change, they must first be the change. He encouraged everyone to sign up their neighbors, their church family and their co-workers to vote and have their voice heard on what needs to change.

He explained while residents may not can change what happens in Washington D.C., they have the power to change the way things continue in Decatur County.

Carol Head, chief official of the Board of Registration echoed on the importance of registering to vote and invited everyone in attendance to come to the back after the presentation and check his or her registration status.

The final speaker was Winston Price, M.D. Chief of Staff at Bainbridge Memorial Hospital. He gave the history of Dr. King’s life and left everyone with three challenges.

He invited them to create an open community, which included access to affordable healthcare in rural America. Second, he challenged them to speak up and speak out. This means no longer keeping silent when someone sees an act of injustice and knows better. Last, he challenged everyone to create a moral roadmap for future leaders. He wants everyone to teach children to resist bullying, racial and sexual discrimination and harassment in any form.

With a final prayer from Rev. Ryan Carnes the program ended and residents felt a restored sense of faith that they have the power to change the future.

At the morning ceremony, Liz Tomlin presented the grand marshal of the MLK Parade, Jeanette Grimseley, with a bouquet. Lora Akins, Brandie Sanders and her children filled the air with their sweet voices, Mayor Edward Reynolds spoke about the talents that Bainbridge has and Sheriff Wiley Griffin spoke of the sacrifices made by Rev. John Thomas, who lost his leg many years ago as a deputy helping two women on the side of the road.

Florida lady reunites with cat after losing her during Irma evacuation

To what lengths would you go to find your lost pet? Melissa Brimmer of Melbourne, Florida has set no limit... read more