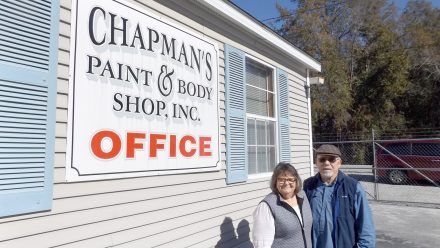 A business that began in 1957, as Clyde Chapman opened his first auto paint and repair shop on Bainbridge Street, came to an end Dec. 28, 2017.  But, the intervening years chronicle a lot of growth, service and change for Chapman’s Paint and Body Shop on Old Whigham Road.

Larry Chapman began working in his father’s business at the tender age of 6, when he was recruited to sweep up at the end of the day. By age 8, he was learning the necessary skills, beginning with taping and sanding prior to the application of paint.

Larry shared some memories of the early years of business, saying his father would paint anything for anybody—porch furniture, even a Christmas tree—anything that stood still long enough to be painted.

When Larry graduated from high school, he married his childhood sweetheart, Lenorah, and the two purchased the business from his dad in 1983. They worked alongside each other—he in charge of the outside work, while she took care of the office duties and customer relations.

It was a formula that worked, as it has been a very successful business, one in which by the time of their retirement they were doing repair work for the third generation of customers.

In 1965 his father moved the business to its present location, where there was only one building at the time. All through high school, Larry worked for his father after school and through the summer. He recalls the business used to paint an entire automobile for $35.00—and these were all big autos. “If they wanted a two-tone, with the roof a different color, it cost $45.00,” he explains— A far cry from today’s price of several thousand dollars.

The company has been doing direct repair for several insurance companies, and estimate in recent years they did at least 40 cars a month while their paint bills were running $5,000 a month.

Larry, like his father, has not been immune to painting some different objects. He has painted airplanes, and probably one of the most recognizable jobs has been painting the big FRM bull, a job they have done more than once. It seems the company had taken the bull to north Georgia for an event, and on the way home on I-75, it came loose on the trailer and fell to the road, where it was all broken up. It was brought in to Chapman for repair, and was very visible from one of the service areas. Lenorah laughs as she recalls people driving by would do a double take when they saw that bull standing in one of the paint stalls.

Through the years, the business functioned as a 24-hour service. At one time they had seven wreckers in service, and were on call for law enforcement when there was an arrest for DUI and the car needed to be moved. “That could be any hour of the day or night,” said Lenorah, who added, “We never had much privacy.”

No matter the hour, customer service and satisfaction were primary for the Chapmans. Lenorah said she always endeavored to pattern her customer relations after a quote from Maya Angelou.

Now 60 years after its founding, the Chapmans have opted to retire and the business and grounds are for sale by owner.

At the time of their last day in business there were six employees, most with long-term employment. “Our employees were just like family to us,” said Lenorah, adding, “We keep in touch and happily they all have found new jobs.”

“It’s been a good life,” says Larry. But, now that they are retired, the two hope to do a little traveling, maybe a day or two away, and they will have more time to devote to their charitable work. “We enjoy helping people, like taking them food when they are sick.”

They will also have more time to spend with grandchildren and their beloved dog, Cotton, who came to work with them every day.

The City of Bainbridge has been working on rebranding itself for the last year, during the first few weeks of... read more