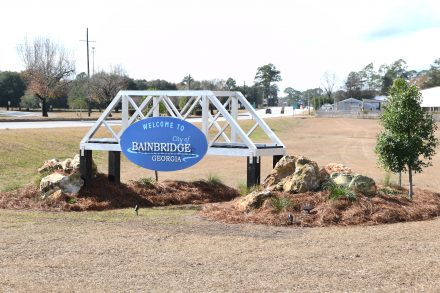 The City of Bainbridge has been working on rebranding itself for the last year, during the first few weeks of 2018 they finished the final project of the rebrand. This final project was a new “Welcome to Bainbridge” sign that included an iconic Bainbridge landmark.

The previous “Welcome to Bainbridge” sign had been in  place for more than 20 years, and the city no longer believed this sign was a depiction of what the community was about. That’s when Amanda Glover, executive director of the downtown development authority, had a dream. In her dream she saw the old train trestle being remade into a smaller sign.

“It’s such an iconic landmark,” Glover said. “So many local people come and photograph it.”

After the dream, Glover approached Nikki Rich from Rich Graphics and Matrix out of Albany to see how to turn this vision into a reality. Matrix helped create a spec of what it would look like and gave it to Glover. Glover presented it to the Convention and Visitor’s Bureau, who funded the project and then bid it out. Matrix was the successful bidder, and has been working to make sure the sign is everything Glover desired.

Once the sign was completed, Glover turned to Jeff Jeter at In the Garden to help with landscaping. Jeter created the landscaping to look like the sides of a riverbank. In addition he helped get rid of weeds and underbrush, and will be building a landscape, sound barrier and planting hedges and shrubbery on the fencerow across from the apartments on Hwy. 84.

The Parks Department and Phil Long also assisted in the landscaping; they helped Glover locate limestone rocks to enhance the look and worked with planting around the rocks.

Residents can find the two newest signs on Highway 84 and on their way back from Tallahassee. Two more will be installed that people can view when returning from Donalsonville and Colquitt in the near future. The signs have new lighting and will be visible for all visitors and residents traveling late at night.