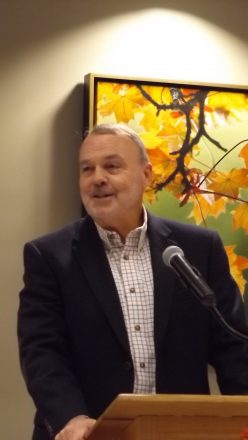 Industrial Development Authority Executive Director, Rick McCaskill told Rotary members on Tuesday that there is a lot of exciting activity going on now in Decatur County.

He began by mentioning the coming of Harrell Ag Products, an agricultural implement facility from Leesburg, that is expanding their operation and moving the semi-truck trailers production into the building formerly occupied by SIPS.  Their former neighbor, SmithCo Recyling has now moved to a new building in town the Authority made possible through a lease/purchase agreement.

Another company they are working with is Minerva Works, a data processing operation, who had originally planned to build their own building, but for now will rent space and build up their business base before building.

Danimer Scientific now employs 84 people with good paying jobs and another major expansion is coming in a few weeks, according to McCaskill, who said Decatur County is in competition with other communities for that expansion, but he feels we may have the upper hand.

McCaskill then addressed a “confidential project” they are working on now and said he expects to be able to make an announcement in 60-90 days. The company would go into the industrial park and provide “enormous, good paying jobs.” He credited the cooperation between the city, county and state governments for helping that project along.

The Authority is ready to build a rail facility with two spurs near the waste-water treatment building. Special loading and unloading equipment will be there for the use of all manufacturers. He said rail spurs are very expensive, running $280,000 each, and the County will own the spurs, which will be operated by Shortline Railroad. They will be a big attraction to prospective industries.

He continued by saying a lot of agri-businesses have expanded over the recent year. He cited Green Circle Corn, which now has 85 workers packing sweet corn five days a week, year-round. It is no longer seasonal work, but full-time, year-round.

All of the increased manufacturing has shown a spotlight on the need for technical workers. McCaskill stressed the need to get high school graduates to a technical level where they can make a good living and be productive.

He indicated there was good cooperation arising from conferences with the schools and mentioned what is happening at Bainbridge Manufacturing in relation to that. Admittedly hiring has been slow coming there, but the state has implemented a training system in the company, and they expect to graduate the first class next week. There are currently only 15 employees, but all new equipment is being installed and the first group of grads will each be trained on a specific machine.

He mentioned that Kia, which once housed autos in the industrial park, has since moved elsewhere. A man from Miami owns the property and may bring in another operation.

The recently built spec building will be a temporary home for the confidential company and will serve until they can get their own buildings up. Having a spec building available is a great marketing tool in economic development.

He spoke of the solar panel business and the impact it has had on the tax base. Southern Power Company, owner of the largest solar panel operation, paid $2,229,900 in property taxes last year. He said they are now waiting for the next round of bids, but doesn’t expect Decatur County will get another one unless they are willing to give a tax break.

He cited that Mitchell County just gave a solar company a 75% tax break. “We won’t do that, but we may have to give something.”

In closing, he gave some numbers to back up the growth that has occurred. Decatur County now has a workforce of 11,188 employed, a larger number than has been in years. The unemployment rate is 5%, the lowest it has been for a while.

In answer to questions, he indicated the county needs to diversify their manufacturing base, so that if one industry goes down, it doesn’t destroy the whole economy. Asked specifically if there were more layoffs coming from Shaw and will they remain here, McCaskill answered, “They play their cards close to the vest.” They are down to using 50% of the facility and have 50 employees. It doesn’t look good, but if they went, it would leave a good building for us.

He concluded by saying, “There are good solid things on the horizon. We are getting  some attention— but the challenge will be our workforce.”

BDCHS Race to Rescue is January 20