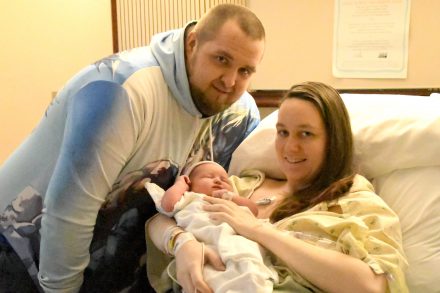 Baby Athena Veronica King weighed in at 9 pounds exactly and was 21 inches. Proud parents, Brittany and Rusty King were elated.

Brittany wanted to have the first baby of 2018 and had asked the doctor if they could do the C-Section right at midnight on Dec. 31, but was told she would have to wait. She was a little disappointed, but when she found out she still had the first baby of the New Year, she was thrilled.

Athena’s great-grandmother, Roberta Meighan reminded Brittany it is all in God’s timing, and Brittany agreed, saying, “it truly is.”

Athena has an older brother, one-year-old, Aries. Both parents said Aries was less than impressed when he met Athena, but they think he will change his mind when she comes home.

The children’s names stem from Greek gods, and are named perfectly after that.

Athena is the goddess of wisdom and military victory, while Aries is the Greek god of War.

With a laugh, Rusty told Bainbridge High School to look out because these two gods will be athletic victors one day.

Athena and both of her parents were in good spirits and plan to go home on Thursday if everyone is feeling well.