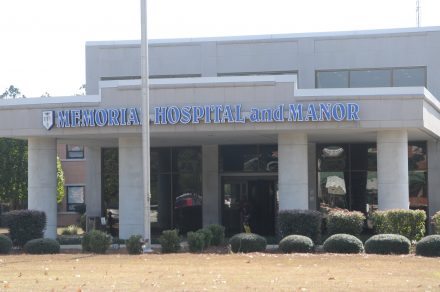 Memorial Hospital and Manor faced a variety of changes this year including a bond agreement and a new CEO.

The Bainbridge City Council, Decatur County Commission and the Hospital Authority held a joint called meeting where the three entities each unanimously approved a Memorandum of Understanding that is expected to return Memorial Hospital and Manor to a stable financial state and secure its future. Under the approved MOU, the hospital’s current $9.5-million debt, which is held by local financial institutions, will be refinanced through a bond sale.

This enabled the hospital to lower its current interest rate to a figure that is projected to be under 3-percent and restructure the debt service payments to three payments per year instead of monthly payments. In all, $11.5-million in bonds will be sold, which will pay off the existing debt and also give the hospital $2-million in cash flow that can be used for capital improvements.

With a new cash flow to help capital improvements, MHM decided to add a new face to help with the changes taking place. James “Jim” Lambert took the helm Monday, November 27th as MHM’s new Chief Executive Officer. Lambert served most recently as President of the Arkansas Health Alliance, a joint venture formed by CHI St. Vincent Health System and Conway Regional Health System to bring value to both organizations and the communities they serve. Prior to that, he was President and CEO of Conway Regional Health System in Conway, Arkansas, where he also previously worked as Chief Operating Officer.  During his tenure Conway Regional Health System earned the Arkansas Governor’s Quality Award in 2014 and received “Best in State” ratings by Healthgrades and Carechex. Hospital Authority Board member Glennie Bench said she believed he could help in the goal they had set and make them the best hospital in rural Georgia.

Bainbridge State College faced a notable change this year, merging with Abraham Baldwin Agricultural College. The Board of Regents of the University System of Georgia approved the consolidation of Bainbridge State College (BSC) and Abraham Baldwin Agricultural College (ABAC). Not long after that approval was finalized, Southern Regional Technical College (SRTC) was asked to assume responsibility for the technical programs being offered by BSC. SRTC offers over 148 degree, diploma, and certificate programs that are designed to expedite a student’s access to his or her desired career, and 27 general education courses that transfer to the University System of Georgia institutions and 19 private colleges and universities in Georgia.

The Southern Association of Colleges and Schools Commission on Colleges (SACSCOC) gave its approval to the consolidation plans Abraham Baldwin Agricultural College (ABAC) and Bainbridge State College in December, finalizing the process.

The consolidation of these two institutions is expected to enable the University System to better serve students, broaden or redesign academic programs offered in the South Georgia region and reinvest savings into academics to improve student success.

The recommended consolidation proposes to expand upon ABAC’s specialized-degree programs that are uniquely meeting the needs of agriculture.

A story that not only shocked Bainbridge, but The Post-Searchlight specifically was the murder of employee, Hubert Moore.

When first responders arrived on scene, they found Moore lying on the ground by the door to a delivery truck. Officers attempted CPR, and a few minutes later Moore was pronounced dead. After surveillance footage from local business surfaced, Louis Lamorris Ousley, 29, Thaddas Nundra, 38, and Ronnie Denardo McFadden were charged with felony murder and criminal attempt of armed robbery.

Nundra was also charged with malice murder, as he is believed to be the man who shot and killed Moore.

Although nobody will get to feel or experience those selfless qualities from Moore anymore, they’ll always remember them.

His gentle, hardworking personality could be easily overlooked, but once you took a short time to know the man, it was impossible to forget.

During the special November election, TSPLOST was added to the ballot, where residents voted “yes” to the 1-cent sales tax. TSPLOST was a special local option sales tax that took 1 percent of all sales in Decatur County and put it toward transportation projects.

Sales tax in the county rose from 7 cents to 8 cents on the dollar. But, the money that went towards paving and repaving roads ultimately provided relief to Decatur County’s general fund, and stabilized the millage rate.

5. Bainbridge businesses see changes in ownership, new ones open up

Bainbridge saw a spike in retail this year. With a new restaurant on the square and changes in retail store ownership, it proved to be a booming new year. 2017 ushered in a new era for Grimsley Pharmacy Center. Randy Logue became the owner of the pharmacy and Johnny Grimsley started working for Logue.

It was a longtime dream of Logue’s to own a pharmacy and while he kept the patient care the same he added some new technological advances. Reeves also changed ownership after 44 years. After much thought, Tom and Gloria Reeves decided to retire and sell their landmark store on the square to two newcomers. Shae Brouillet and Amanda Rentz, both long-term employees at Godwin Jewelers, (28 years and 18 years respectively) took on the challenge of owning their own business.

The store officially changed over in July, when the store was renamed Reeve’s Gifts, Jewelry and More. They added some new lines of jewelry and expanded the housewares department.

They also wanted to reverse the trend of people leaving Bainbridge to go out to eat, while attracting customers from other communities.

It was their hope that their venture would encourage others to come open a business in the downtown and bring in more commerce and jobs.