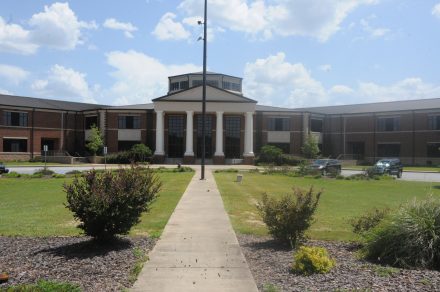 Assistant Superintendent Linda Lumpkin also retired after 32 years in the Decatur County School System, and almost 42 years of educational service overall. Lumpkin has worked at almost every school in the system since coming to Bainbridge in 1985 as a math teacher.

Decatur County Schools also saw a boost come from EPLOST, which was voted on earlier this year. The 2017 ESPLOST passed with 87.4 percent of voters choosing “yes” for the 1 cent sales tax that goes toward new facilities, renovations and retiring bond debt in Decatur County schools. ESPLOST will help Decatur County schools maintain and improve their buildings, bus fleet, technology and other equipment to better the education of their students.

Notably, the passing of the 2017 ESPLOST will help pay for the construction of Bainbridge High School. The high school’s debt, in the form of bonds, will be paid off of several ESPLOST cycles.

7. Bainbridge, Decatur County affected by Hurricane Irma in more ways than one

During September, Bainbridge citizens braced for Hurricane Irma as it churned towards the Florida/Georgia border.

Hurricane Irma was a Category 5 hurricane that was considered “potentially catastrophic.” Decatur County was considered a risk county. In order to prepare the City Of Bainbridge began pumping out the storm water ponds and checking every storm drain. While, Irma ripped through parts of Florida, Bainbridge was spared but still received tropical storm force winds and was declared in a state of emergency. Along with howling winds and rain, the storm brought evacuees from all over the state of Florida.

Churches, residents and anyone with extra room began to open their doors to anyone fleeing the storm. Churches banded together to offer food to those who left everything behind and residents offered their sympathy during this time.

Although the nature of the storm was terrifying, it created lasting friendships for some who opened their doors, such as Benny and Mary Grace Hayes. The storm brought about a side of Bainbridge that was commendable and comfortable for many refugees.

The Recreation Authority expanded in many ways during 2017.

They voted to provide soccer to youth this fall. Fernando Tiacuati, the executive director of the Toluca Atlanta Soccer Academy, raised the question on why there weren’t any competitive soccer leagues in Southwest Georgia.Tiacuati and the staff at Toluca Academy requested to be involved in a private league in Bainbridge and now work in conjunction with the soccer program offered at the Recreation Authority.

In addition to offering more sports, the Bainbridge-Decatur County Recreation Authority unanimously voted to purchase a 21-acre plot of land on Hubert Dollar Drive for $168,000. The land lies between the Bill Reynolds Sports Complex and the Early May Boat Basin.

The Recreation Authority is just beginning to develop ideas of what to put there, but the biggest project on its list is a multiuse building with a gymnasium, offices and additional sports fields.

After a 3-2 vote in a Bainbridge City Council meeting, a downtown alcohol amendment presented by Amanda Glover, director of the Downtown Development Authority, was accepted.

Glover wanted Bainbridge to be on the forefront of cities that would allow for open container in the central business district. She believed it stimulate current businesses and be attractive to potential businesses. Roy Oliver agreed, explaining how downtown required a special set of rules that the rest of Bainbridge did not need. While some Council members were convinced this would be a great tool for the DDA to utilize, Councilwoman Roslyn Palmer and Councilman Phil Long were not convinced.

Palmer was concerned about restaurants serving alcohol and meals at the tables in Willis Park. She considered the tables public property and thought it would be a liability to put the city in a position where something could happen on their property. Long didn’t believe it was fair to have an open container law in only one area of Bainbridge, while it wasn’t applicable in other areas.

10. Point Broadband gets running with rural internet in Decatur Co.

Point Broadband, the newly formed company that consolidated Turner Broadband, updated the Decatur County Board of Commissioners earlier this year with specifics on the Internet service they will provide.

The merger took place after Decatur County residents who subscribed to Turner Broadband grew more and more concerned over the past year with failing Internet service and connection issues. Jason Gaunt was hired as the new COO and promised to provide fast and reliable Internet service to customers around the county. Point Broadband then began to offer Internet within four months of merging with Turner Broadband and worked to create a new face for the company.

The partnership formalized in February, where they began to work on new marketing initiatives and community presence.

Kids gathered at WalMart Friday morning to participate in the annual Shop with a Cop event. Throughout the year BPS... read more