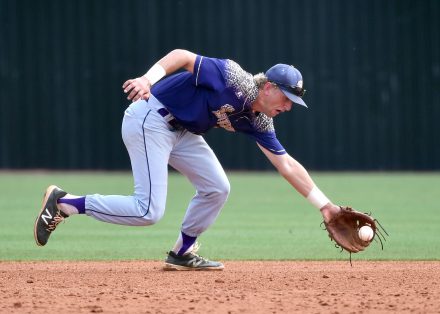 10. Bearcat baseball makes playoffs for second season in a row

The Bainbridge Bearcat baseball team came into the 2017 season hot off one of the best years the program has ever had in 2016, where the team went 21-9 and advanced to the second round of the state playoffs.

While it wasn’t as good as the 2016 season, the Bearcats’ 2017 outing was nothing to shake a finger at. Bainbridge went 17-14 playing in one of the toughest regions in 1-AAAAA against teams like Veterans and Harris County. The Bearcats rounded the regular season off with a seven-game win streak before losing the final game to Madison County.

Bainbridge headed to Starr’s Mill for the first round of playoffs and lost in two games, but not without giving a fight.

Bainbridge baseball hopes to make waves in the 2018 season and make it to the playoffs for three years in a row.

These young girls paid no mind to the summer heat as the Bill Reynolds Sports Complex hosted the Georgia Parks and Recreation Association 10U state softball tournament in July. The tournament was full of big hits and clutch plays from all teams. Colquitt County beat Vidalia in two games to win it all. Plans are already in place for Bainbridge to host the baseball state tournament in the summer of 2018.

Harold Allen can often be seen in Bainbridge running along the sidewalk at any given location, any time of day. The marathon runner took his first step into 100-mile races this year, and has made huge strides in improving his race times.

Most recently, Allen set out from Jacksonville, Florida, at the starting line of the Daytona 100-mile race with one goal in mind: do better than the last 100-mile race.

Allen went above and beyond, hitting a new personal record of 22 hours, shaving off more than 6 hours from his previous 100-mile race time in Pensacola this past summer.

Allen didn’t expect the race to be as hilly as it was, despite the race being advertised as relatively flat. He said running on the beach during some stretches was tough, especially in the early hours of the morning when freezing winds were coming off the water.

His favorite part of the race was running through St. Augustine, which he described as beautiful despite having one of the toughest hills of the course.

Still, Allen pushed through it, and kept his focus long enough to set a PR.

In September, Allen headed into the Wildcat Ultra in Pensacola with the goal to beat his 28-hour mark from his last 100-mile race. Unfortunately, he hit 28 hours again.

But he thinks he could have cut it down to 22 hours if it weren’t for the blistering on his feet. Allen ran around a 2.5-mile circuit 40 times, each time passing through a grassy field that got wet with dew.

“My body wasn’t tired, but the blistering on my feet was just massive overnight,” Allen said. “I was pretty much smooth, I was pacing myself through the heat and humidity. When night fell, the blistering got worse.”

Allen ran 80 miles with the blisters getting worse in his soggy shoes every step. Despite the finish time and the pain, he puts the difficulty level about on par with Fort Clinch back in March.

Allen will compete in his fourth 100-mile race in Texas in February.

The team will travel to Dalton to compete and represent Bainbridge on Dec 1-2. The team has been graciously sponsored by RX Drug Center and Tex-Par. We are so thankful for their generous investment in our players.

It’s just another one to add to the growing list of championships for the eighth grade football team.

The Bearcats finished the regular season undefeated 6-0 and capped the year off with a 36-14 win over TCC Wednesday at Centennial Field for the championship trophy.

The game started out close, but the Bearcats ran away with in the second quarter and didn’t look back.

A bulk of the current BHS varsity seniors were on the eighth grade football team that started the five-year undefeated streak.

A timely defense and a strong running attack, led by Donta Broadnax with four touchdowns, rocketed Bainbridge to the championship trophy on Wednesday at TCC Middle School.

The seventh grade Bearcats finished the season with a 6-2 record.

This makes the third consecutive SOWEGA championship the seventh grade Bainbridge team has won, and the fourth in the last five seasons. The Bearcats have appeared in each final since 2012.

A bulk of the current BHS varsity seniors were on the eighth grade football team that started the five-year undefeated streak.

The Cats took the mat this past weekend at Chiles High school in Tallahassee, Florida against teams like TCC, Chiles,... read more