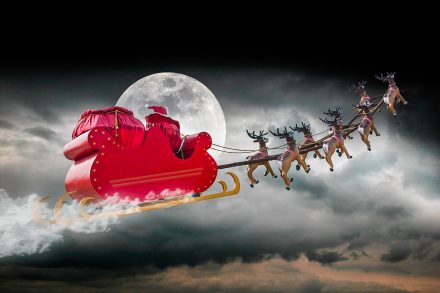 Santa Claus is scheduled to come to town Sunday night, and local law enforcement is helping coordinate his arrival.

The Decatur County Sheriff’s Office and Bainbridge Public Safety are tasked with facilitating a smooth trip for Santa through our county.

According to Christmas historians, Bainbridge is an important stop on Santa’s trip around the world. The Flint River provides his reindeer with a crucial water break and Flint River Mills leaves out a hearty snack. Without this vital stop, it’s assumed the reindeer would run out of energy, leaving thousands of kids west of Bainbridge without presents.

“This being one of the most important stops in Santa’s route, we like to do whatever we can to make it as easy as possible for the big guy,” said BPS Director Jerry Carter. “Christmas Eve is definitely one of our biggest nights of the year.”

Officers keep an eye on the sky the entire night and keep their radios near to listen out for Santa’s arrival. Once the call comes in, it’s all hands on deck. The DCSO sends deputies to all corners of the county to track Santa’s progress and help him with anything he needs.

“It’s unbelievably important to us,” said Sheriff Wiley Griffin. “We have extra deputies on duty that night to handle anything that might come up.”

Sheriff Griffin said one of the most important jobs of the night comes if Santa’s sleigh hits turbulence while in flight.

“It can shake some presents loose and they fall out of Santa’s sack,” said Griffin. “What we’ll do is go retrieve them and put them in an easy to reach location for Santa to pick them back up and continue his deliveries to all our houses.”

Carter added, “No child should ever have to wake up on Christmas to find no presents because they fell out of Santa’s sleigh. Making sure that doesn’t happen is something we take serious pride in.”

There is also a team of officers and deputies assigned to follow right behind the sleigh, picking up reindeer droppings to cover any trace Santa may leave behind.  It’s not the most glamourous work, but someone has to do it, is the mentality law enforcement has about it.

“The most important part of the whole procedure is that Santa remains unseen,” said Griffin.

BPS officers and DCSO deputies have never seen Santa with their own eyes during their Christmas Eve protocol. Griffin and Carter believe that Santa wouldn’t have it any other way.

During Tuesday’s City Council meeting, Co-Chairman of the Collaborative Impact for Decatur County, Billy Ward presented the Council with the... read more